Live from Wimbledon: NEP refines operations for WBS and ESPN

This year’s Wimbledon tennis Championships is year two of a four-year relationship between Wimbledon Broadcast Services (WBS) and NEP whereby the latter is providing technical gear and engineering services for the tournament. And while year two of deals can occasionally see some major changes and overhauls, the Wimbledon technical plan has seen only minor changes as the initial efforts in year one were sufficiently forward-thinking: embracing technologies like ST-2110, UHD and HDR. 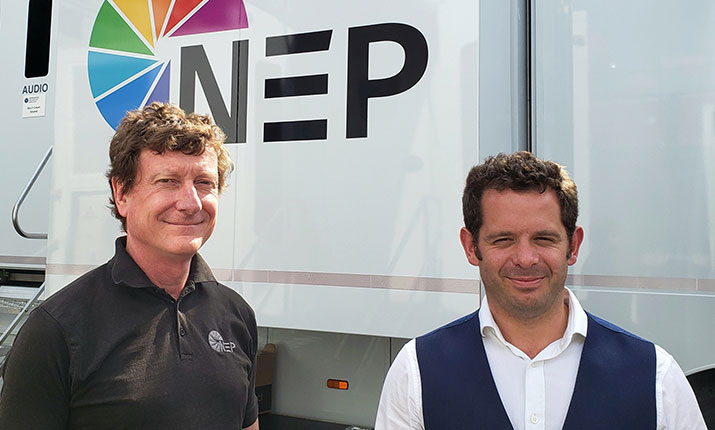 “We improved on some things, but technology wise it is the same,” says Richard Lancaster, NEP UK, technical project manager for Wimbledon.

“But there were some geography changes like moving our engineering office out of the Master Control Room area.”

Another location change is that the Trace operations for the seven outside courts, which are produced using Simply Live production systems and camera systems from Fletcher, moved into the broadcast centre.

Those systems also improved via software tweaks and also features like a Snapshot function that would allow for the operator of the system to swap between, say a player in the foreground or background when working with automated tracking. Operators were also able to work on multiple courts at once and three operators were able to handle all seven courts.

“Those productions finished up last Saturday and they had a clean week,” says Lancaster. “We also changed the cameras on those courts from Sony P43 cameras to Sony P50 cameras.”

The core of the WBS facility provided by NEP inside the Wimbledon Broadcast Centre are once again two completely redundant Grass Valley IQ modular systems that work in conjunction with Arista Network switches. The router is decentralised with various nodes around the Broadcast Centre for the rights holders. Outside of the WBC are three NEP OB units: Venus, Ceres, and Emerald from NEP Ireland were matches on Centre Court, No. 1 Court, and No. 2 Court are produced.

Year two also saw an improvement in cabling and rigging as the team was able to get a jump on those efforts and also recommission the fibre in the beginning of the year. Additional fibre and cabling was added to the MCR and the rigging process was adjusted so that rights holders could start plugging equipment in earlier.

While Lancaster oversees the WBS side of NEP’s operations Timothy Allsop is serving as technical project manager for another big client: ESPN. ESPN has three of its own production galleries on site as it is producing content for two channels, ESPN and ESPN2 as well as for ESPN’s ITV service and ESPN International needs. There are also two studios and then a third studio that is shared with BBC as ESPN uses it in the morning for Breakfast at Wimbledon and the BBC uses it in the evening for a wrap-up show. 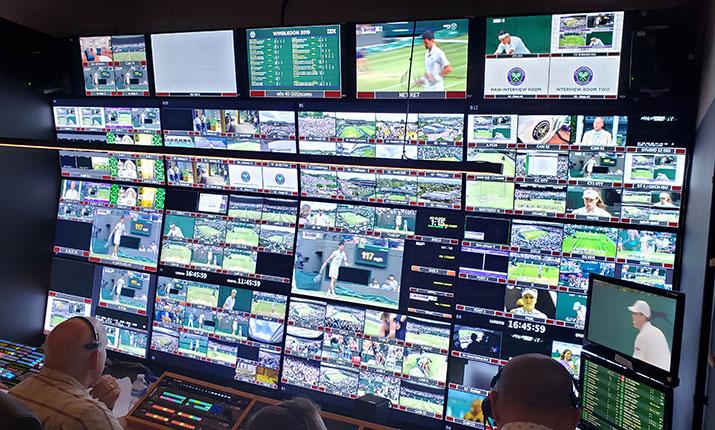 ESPN’s front bench in Gallery A at Wimbledon.

The ESPN team hits its highpoint on July 8, known as “Manic Monday,” as it is the day after a Sunday that has no play.

“This year ESPN has slightly less on-court cameras as they have one robotic and two big-lens cameras on Centre Court and then three cameras on Court One,” says Allsop. “ESPN also has nine robotic cameras, including the cameras that cover players coming on and off the court and those are shared with WBS.”

The tournament is heading into its closing stages and Lancaster says the NEP staff has been great this year.

“It’s such an epic project and when you first do a project it isn’t until you have done it once that you can see the things that you can improve on in year two,” he says. “It’s an event we all love doing, and everyone brings their A game.”

Much of the kit at Wimbledon is going to be heading to Japan for the Rugby World Cup which begins in September.

“The Wimbledon flypack is four mid-sized flypacks so in a couple of weeks we will split it down to four flypacks that will be sent to Japan,” says Lancaster. “And then we will also be involved with the IAAF World Athletic Championships in Doha so there is a lot going on as we also have two new truck builds.”