Telstra’s NetCam technology has been deployed at The All England Lawn Tennis Club (AELTC) Championships at Wimbledon, this year, providing audiences with never before broadcast vision of the tournament. 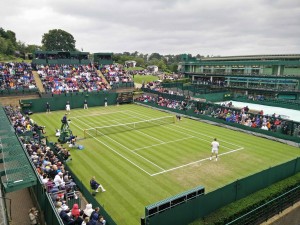 Telstra Broadcast Services’ NetCam is the next evolution of Telstra’s Globecam unit, a live, point-of-view miniature camera solution for live sport. Telstra’s NetCam is deployed on each side of the net to deliver audiences with a panorama of Wimbledon’s Centre and No.1 Courts during match play. In addition to improving the fan’s viewing experience, the miniature camera technology also provides players and officials with a unique, live net’s eye view of the on-court action.

Trevor Boal, head of Telstra Broadcast Services, commented on what made Telstra decide to innovate on Globecam to develop NetCam. “We know viewers love to see an up close, in-action style of broadcasting so we saw an opportunity in tennis, due to its global reach, to bring fans closer to the game than ever before. Through innovation in mechanical stabilisation, overheat prevention and remote colour correction, the technology keeps footage sharp, clear and vibrant, despite the live camera’s small size and frame.”

After a series of successful debuts in Prague, Singapore, Sydney, Melbourne, Paris and now London, Telstra’s NetCam is delivering a more immersive broadcast experience for tennis fans around the world. Said Boal: “Broadcasting vision from Telstra’s NetCam is a first for The Championships, Wimbledon, enhancing match coverage like never before.”

On how footage from Netcam is being used and broadcast at Wimbledon, and by whom, Boal noted: “By deploying the NetCam device on each side of the net the miniature camera delivers an immersive broadcast experience for tennis fans around the world. The All English Lawn Tennis Club, as part of its host duties, broadcasts this vision to all rights holders. AELTC directors are choosing NetCam shots live and in replay.”

Paul Davies, head of broadcast and production at AELTC said: “Wimbledon has a rich tradition of broadcast innovation and we are delighted to bring these unique images from NetCam on Centre and No.1 Courts. Never before have our global audiences had the opportunity to get so up close and personal to the action on SW19’s hallowed lawns.”

Boal commented on how Telstra expects to see the use of NetCam grow: “Globecam, like Telstra, has an award-winning history of innovation by putting customer experience and fan viewing at the heart of everything we do. Aligned with this we are always looking for ways in which we can continue to innovate including VR, AR and VAR but are guided by our speciality of developing miniature technology that can be deployed right now to make a difference to the viewer experience.”

He continued: “NetCam has been designed specifically for tennis and has been used for events including Wimbledon and The Australian Open. NetCam is part of the GlobeCam family of products that are used by many different sports all over the world including football, horse racing and motorsports to bring viewers closer to live action.”

The NetCam device is the result of several years of research in Telstra’s Globecam facility in Melbourne working closely with tennis authorities including Tennis Australia and the AELTC to ensure viability. Globecam has its own proprietary camera and software allowing the creation of a unique device in a custom-designed housing. The technology captures live play during the broadcast production with high-quality HD, stabilisation and degree of control once only dreamed of.

Tennis is the latest sport to feature Globecam after a number of sporting events around the world including cricket, all codes of football, motor racing and even live skydiving. NetCam will feature at The Championships, Wimbledon, throughout the fortnight.