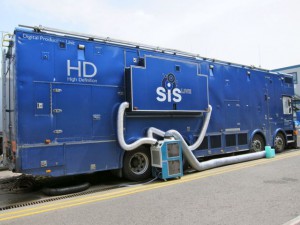 SIS OB units are once again playing a key role in Wimbledon coverage for the BBC and broadcasters around the world.

Wimbledon 2012 is entering the second half of week one and a number of changes, including a fresh cabling infrastructure in the broadcast centre, a revamped press conference room, and a new rooftop studio for [email protected], a new online programme at Wimbledon.com that keeps fans on top of all the action are tops on the list.

The biggest change from last year, and one that has impacted everyone, has been a recabling of the Broadcast Centre, a move spurred on by next month’s Olympic games as the AELTC courts will be used for the tennis matches. Last year, after the Championship concluded, broadcasters were required to take out any existing cable (and cable left behind by past broadcasters). Once the old cabling was removed a new fiber, copper, triax, and multicore infrastructure was laid down, complete with a new color-coding system so that specific broadcasters would no which cable trays and hooks to use.

“We laid in quite a lot of the fibre ourselves and now have a connector box so that broadcasters don’t have to run their own cables,” says Mervyn Hall, broadcast manager for AELTC. “Our people are happy that someone isn’t running cables and the [rights holders] are happy because it only takes a second to plug in their cables.” 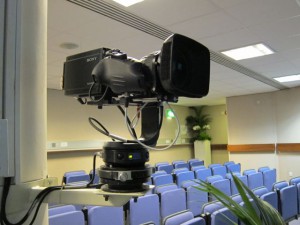 New cameras are providing a new look to the Wimbledon press conferences.

“We replaced the old remote camera heads, changed the entire sound system and also completely re-engineered the audio,” says Hall. Previously college students would use poles to get microphones out to reporters seated in the room but new ceiling mics and a touchscreen controller that can activate the mic nearest the reporter asking the question have improved the question-and-answer process.

“With a touchscreen the moderator brings up the mic and kills all the other mics,” says Hall. “Next year is phase two which will be about the aesthetics of the press conference area.”

That’s not all that remains on the “to-do” list as the broadcast compound, home to a number of production trucks from SIS Live used by the BBC for the core coverage, will also get a refresh at some point to improve the aesthetics and make it run a bit more efficiently from a technical perspective. 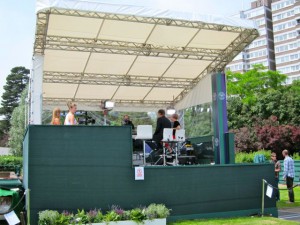 The [email protected] set is located on the Media Centre rooftop garden.

Another new offering this year is a video version of [email protected], available online at the Wimbledon.com Website. The decision to make [email protected] an online TV programme came about after the team decided that [email protected] may have run its course and was in need of a visual element with some live reporting and analysis. Ex-tennis stars Matts Wilander and Annabel Croft were brought in to host the show alongside two reporters that cover the courts and can not only comment on past action but also offer online viewers a very small amount of live coverage of each match. IMG is providing the technical services that include a rooftop studio on top of the broadcast centre, complete with a panoramic view of the grounds.

“We’ve had a good reaction around the globe,” says Hall.