While ORF is going all live for the Championships, German broadcasters ARD and ZDF face the challenge of the events starting when evening news broadcasts are on air back home, something the broadcasters overcome by combing live coverage with delayed coverage. 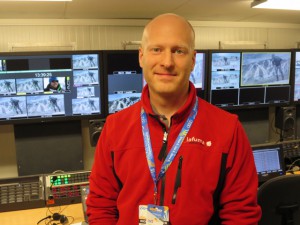 “The speed disciplines interfere with the 7 p.m. major news show on ZDF and the technical disciplines interfere with the 8 p.m. news show on ARD,” says Florian Rathgeber, technical manager for the ARD/ZDF coverage. The solution is to miss the first 15 minutes of each event and then come on with a quick recap and the full run of the leader to that point and then go live for an hour. Coverage is also being delivered back home in 5.1 Surround Sound.

The broadcasters rely on two EVS servers to help create highlights for the time delay as well as three Avid edit suites that are tied to an ISIS server so that all of the editors can access the same material at the same time.

“We have three cameras, two on the presenter studio and one at the mixed zone for interviews,” adds Rathgeber. A double-sized mix zone is also located at the at medal’s plaza in Vail and two video and audio circuits allow for those camera signals to be cut from the IBC.