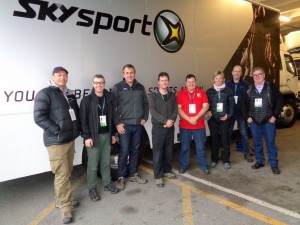 There are few places more distant on the planet from London than New Zealand, so doing a remote production from there really tests the concept. Thankfully, the speed of light is such that following the British and Irish Lions as they took on the All Blacks on the other side of the world proved less daunting than initially expected. However, it took a lot of planning by the team from Sky Sports to make it so.

“Once the decision was made to make it a remote production our aim was to make sure it had a positive effect on the viewer’s experience,” said Sky Sports’ match director, Sam Foskett. “In fact, working remotely has enabled us to use new technology to enhance our coverage,” in comparison to the Lions’ Australia tour in 2013. This has included using Mobile Viewpoint bonded cellular kits to receive live feeds from outside the stadiums, a Blackmagic Videohub to receive multiple feeds from the host broadcaster, Sky New Zealand, including their drone, hi-mo and changing room cameras, and the TOG analysis tool from the gallery in Sky Studios.

Going remote has also had a positive effect on the production team’s experience. “It appears more relaxed than an OB truck you step into in a car park somewhere,” said Phil Marshall, Sky Sport’s Head of In House Production.

They began planning the Lions Tour more than a year ago, with site surveys of the venues. “We established early on that the fibre infrastructure was there in order to facilitate our requirements. OSB in Auckland were booked to handle our local truck and crewing requirements,” said Sky Sports’ Production Manager, George Griffiths.

Although the tour involved ten matches in total, the first five were less remote than the concluding games, in that the presentation was also in London, taking the world feed from Sky New Zealand, with the unilateral content delivered via Mobile Viewpoint and commentary on VoIP. “We had confidence that we could deliver quality production critical content over a good 20Mbps internet circuit,” he said.

However, for games 6-10 the main presenters and analysts were at the match venues in Hamilton, Eden Park in Auckland (for two games) and in Wellington (also for two games). “We up scaled to OSB’s HD5 unit [from its small HD6 van] and deployed four cameras including a radio camera,” he added. Although the director, producer, vision mixer, sound supervisor, APs and EVS remained in London, “we were joined in New Zealand by our full talent team and Gus Williamson, Head of Rugby Union.”

Full rig and test days took place with circuits to London. “Having circuits available early in the day is very liberating in terms of testing and allowed plenty of time to iron out any problems without the restriction of set satellite times. On TX day circuits are established early and a full facs check can be undertaken with London in a timely manner. The sound desk had been pre-programmed in Auckland prior to deployment and the comms from London and local 4-wires and mixes were handled smoothly,” explained Griffiths.

Montreal-based Aldea managed the end-to-end delivery over fibre from New Zealand to London, with 250Mbps of usable network capacity, working alongside local network provider Kordia. Aldea had previously delivered circuits from the Rio Olympics for Sky Sports News, and won a tender for the Lions’ Tour.

“They have an engineer out here working with us. They pre-shipped their racks, which were all pre-tested at the remote venues,” said Griffiths. 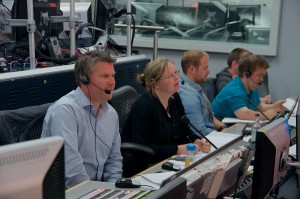 The network handled ten HD vision signals out and four HD reverse feeds, with NTT MVE500 encoders in Ultra Low latency mode used for presentation and camera ISOs. “These signals were available into London in under half a second, with the biggest part of this being the speed of light of the signals from New Zealand back to the UK via North America,” said Technical Manager, Gordon Roxburgh.

ATEME CM5000 encoders were used for encoding the high quality host feeds and Sky ISO cameras. “Apart from the host mixed coverage feed that we wrap around, everything else is a camera ISO,” he added.

A 9MHz local uplink from Kordia was provided to back up the transmission, along with the host feeds being delivered from Sky New Zealand on permanent leased lines.

If the main fibre path suffered any significant outage, requiring use of the satellite feed, six 4-wires were available via the internet using SystemBase 510IP codecs. Reverse visions over the internet were provided using Fujitsu IP900 encoders/decoders with FEC and ARQ error correction. The return feeds were the programme, a switched feed for showing people content on site, graphics stats page, plus the channel TX or sports news TX (two feeds also backed up over the internet).

Communication between the gallery in Sky Studios to talent and a local technical crew “was a major concern pre tour. However, the quality of the talkback has been very impressive, often better than on our domestic OBs. This means that pre-match meetings usually conducted in OB trucks at grounds in the UK have happened over crystal clear talkback from NZ,” said Foskett.

“The comms are a crucial element of any remote production and need to be good so the director feels confident he can get his direction across both to talent, technical crew and cameras effectively. Understanding audio associations is an important part of remote production,” said Griffiths.

“What helped is that the delay is very, very short – less than a second to London and back over fibre. It’s travelling at the speed of light, so delays are minimal, less even than doing a Paris to London SNG uplink. That has been an incredible benefit,” he added.

The quality has also surprised him. “The clarity of the communications to and from London was exceptional. It’s unbelievably clear, with no hiss or hash.” 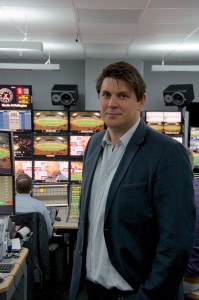 Phil Marshall: Remote production is “more relaxed than an OB truck you step into in a car park somewhere”

“We have a very good working relationship with Sky NZ, sharing both talent and technology. So we have lots of feeds from them, including a world feed created for us free of all graphics, so we can add our own and then ten or so ISOs of their cameras. We then share our F5 hi-mo and arrivals camera with them,” said Foskett.

Foskett not only directed all the pres elements, but also aspects of the match. “The Sky NZ director does the live match cut and most of the replays, but with our own two match cameras we can go to CUs of players or coaches that our commentators are talking about and/or also add occasional replays which we transition to using the Sky NZ replay move to help make the coverage seamless.” He also directs all the match graphics, “which makes the coverage look like a full Sky Sports production and means we can add graphics relevant to our British and Irish audience including individual and team stats.” Alston Elliot did all the match and pres graphics.

Using a Blackmagic Design Videohub in Wellington they were able to bring in any 12 of the Sky NZ cameras at the game, as well as four Sky Sports cameras, with full control over routing from London via the network. “It thinks it’s next door, but it’s 12,000 miles away,” said Jonathan Craggs, Technical Supervisor. All the embedding is done in the output.

The SWIFs (Switchable ISO Feeds) have five return lines to Osterley. The director controlled SWIF 1, the APs 2 and 3, while 4 and 5 were used for disaster recovery, with 4 holding a wide beauty shot of the stadium. Sky Sports had previously used the Videohub for its remote production of the ATP finals at the O2 in London last November.

On the desk behind the director were several EVS operators, doing all of the pres playout for the match build up, and clipping out interviews that came down the line, as well as titles and openers. “Because we’re also able to record match ISOs, we’re able to turn around match coverage and analysis,” added Marshall.

The EVS operators can also switch the Videohub, to select anything for recording and replay. “It really helps the workflow,” said Marshall.

When Sky did its first big remote production for the 15 days of the US Open Tennis in 2015 there were about six sources with only two lines back, and some problems keeping audio in sync. “But, we can get more pictures down the same bandwidth now,” said Craggs.

“The biggest difference between the US Open and New Zealand is moving from venue to venue, so you’ve really got to work hand-in-hand with that telco and delivery partner,” added Marshall.

The audio feeds were mixed by Mark Ledwidge in New Zealand for the game and presentation, and delivered along with two camera feeds with embedded reporter microphone output, while Sound Supervisor Alex Judd in London was mixing in VT inputs together with various elements of the presentation.

“Doing this remotely is more of a collaboration than usual. It requires two supervisors at each end to bring it together,” said Judd. “Although the signal comes back quickly, you still have to calculate the differences,” so as not to introduce feedback in the remote studio speakers or headphones. “If someone is pitch side and they want to hear an interview that might come from me, there is a 1.5-second delay.”

There are only a limited number of physical connections, with four audio streams per incoming feed (apart from the world feed, which has 5.1 effects and the in-game mix – totalling eight channels).

“It is nothing short of a miracle getting everything back from the other side of the world, and the communications are so clear,” he said. Because of the delay, they can’t use open microphones in the gallery, so everyone had to wear headsets.

“We’ve tried to translate everything that happens in the OB world into the remote world to keep it as clear as possible,” he added.

Other than having to re-set some VoIP cards or circuits there have been no difficulties. “We are backed up on the SystemBase codecs as well, but we haven’t had to use any of them. It just feels very smooth doing it this way.”

The main game mix included a full mix of Sky commentators, the TMO and referee, with the effects on the other feeds (a stereo pair and 5.1). “It means that instead of just taking the world feed I can mix in the TMO and ref so you can hear their decisions,” said Judd.

One major change of working remotely is being able to work in “a much more friendly environment than you’d get in a truck. You can hear a bit more without having to have your volumes up higher,” he added.