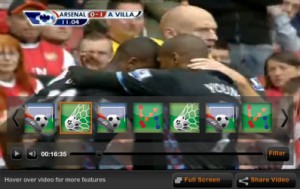 Liverpool-based Edit TV has quite cleverly managed to run two of the broadcast industry’s recent obsessions together, namely monetising the second screen on the one hand, and exploiting the vast Chinese market on the other, with a recent rights deal covering the mobile rights to EPL, Serie A, and German Bundesliga content in China. According to the company, though, it doesn’t all have to be football to crack the market.

“Traction in foreign sports content has traditionally tended to rely on a Chinese star in that league, and most European football league haven’t had that luxury,” explains Matthew O’Connor, Product Director at Edit TV. “The NBA, in particular, is a good example of a sport that has those stars and has used those strongly to its advantage with distribution of its digital media. Sports like snooker, with Ding, and tennis, with Li Na, already hit enormous TV audiences and this can translate even more to huge digital audiences on mobile, IPTV and internet video.”

O’Connor adds that particular clubs are beginning to expand both their broadcasting schedules, as Real Madrid have done this season, or their pre-season promotional activity, as Man City and Milan are doing and have done in the past, it lays the foundations for club brands to drive up the value of those leagues in China by engaging and creating new fans.

Edit TV describes itself as a video solutions and services startup that has a special focus on sports media. Its chief technological weapon is the Edit TV Media Platform, a content indexing, management and distribution platform that underpins applications, web services and video players and essentially lets users do cool stuff with content on mobile devices.

The company has been savvy enough to partner with some of the leading players in the pay-TV middleware space – NDS (the SDP platform), Microsoft (MediaRoom) and Motorola Mobility – to develop and manage new interactive TV experiences for sports content on companion devices.

“As an example, whilst a user is watching an NFL game or an IPL cricket match, on their tablet and smartphone they are getting realtime statistics, social media integration and the ability to use Edit TV’s video technology to simulcast video onto the tablet that is layered with the Edit TV Event Timeline,” says O’Connor. “As events such as sixes or touchdowns, occur, they are published automatically to the users’ video stream. They can rewind to watch on the tablet, or, better still, just ‘swoosh’ the event from the tablet to the TV, and it will play back that event. They can create playlists of favourite moments in the game to share with their friends, switch to simultaneous live streams by events and be recommended particular events or playlists that the broadcaster has access to, to watch on their TV via the swoosh function, or just to watch on their device.”

Its own technology is also, says the company a little boastfully, protected by 17 patents.

“The IP broadly covers the ability to tag, search, playback, navigate, advertise within and personalise video content on any screen,” explains O’Connor. “The video platform market is crowded, but as this market develops we are seeing, particularly in high value content like sports video, a requirement for additional features and functionality for streaming around live and on demand content.”

Edit TV’s indexing technology attaches icons and metadata to time-coded events within video; this allows users to rewind live video by events rather than time.

“If you start watching 30 minutes into a Premier League match you can see a goal has been scored, rewind and watch that clip by clicking on the goal icon, and then rejoin the live stream,” adds O’Connor.

He adds that for content owners, or broadcasters looking to differentiate, reduce churn and increase user engagement this approach also creates potential for new advertising models.

“Inserting adverts within key events can be highly targeted, and can differentiate on what the user is watching,” he explains. “A goal has different advertising opportunities than a red card event, for example.”

China in your hands

The company is a service provider to a content aggregator for sports content in Asia, based in China, called APSN. It provides it with live/VoD streaming management through the Edit TV Media Platform and Edit TV Video Player for a number of football leagues including the English Premier League, Serie A, Bundesliga and Brazilian Campeonato.

“We’ve partnered with them to develop the service to be able to distribute to a number of major portals in China in particular,” says O’Connor. “Our first deployment is with 56.com and RenRen which has its own sports channel available for its subscribers. Across the two portals, this is making European football content available to more than 300 million Chinese internet users.”

That sounds like a big number to European ears, but O’Connor almost downplays it, pointing out that internet access and therefore providing video services is still subject to some stringent controls in China. And there are much, much larger numbers waiting in the wings…

“That said, we are talking about an Internet audience, across desktops, of more than 1 billion people over the next 3-4 years, which clearly represents a phenomenal opportunity for all involved in sports media to capitalise on, whether rights holders, clubs and federations, content owners and agencies or technology service providers,” he says. “For our work with RenRen and 56 alone, we are driving marketing campaigns in the pre-season to reach as many of those 300 million Internet users as possible, and thats just one portal (56 is a wholly owned subsidiary), so we plan on expanding the reach of our distribution to other huge traffic channels like Youku, Tudou and Sina.”