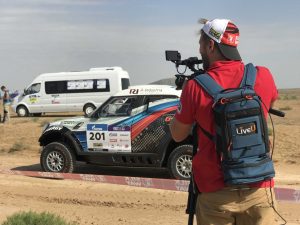 LiveU and Auto24, the official Silk Way Rally 2018 production and broadcasting company, recently joined forces to bring all the excitement of the international off-road rally in Russia to car race enthusiasts everywhere.

For the first time, live transmissions were shared during the rally itself. With 50 participating teams, the annual eight-day rally along the historical silk way is one of the highest-profile, challenging sporting events in the country. Competing in trucks, jeeps and large cars, international teams travel across the same route as merchants journeyed hundreds of years ago, crossing remote desert regions and rural terrain.

LiveU’s LU600 HEVC units were used for the start and finish points, along the route in the Russian’s team truck and overhead on a helicopter. LiveU’s Xtender remote transmission device was used in both the truck and the helicopter, ensuring extra resiliency and high video quality from the most bandwidth-challenged areas.

The feeds were streamed live via an OB van with Auto24’s Moscow studio taking care of the remote production. LiveU’s remote production solution enabled Auto24 to live stream all the feeds simultaneously to the Moscow studio for switching and remote production. This enabled simplified onsite logistics and operations, and reduced costs, allowing the production team to work conveniently from their studio. Video then went live to Silk Way Rally’s Facebook, and YouTube pages as well as Auto24 and other international TV channels.

Dmitry Efimov, CTO of Auto24, said: “In previous years, we were limited to covering the start and finish points using fibre transmission. This year we were keen to show all the action along the route. LiveU’s technology provided the video quality and robustness, as well as the portability, to help us achieve our goals allowing viewers worldwide to follow every stage of the rally from beginning to end.”

“We’re proud that our partnership with Auto24 brought an entirely new dimension to the rally’s live video coverage with the LU600 HEVC performing well in the most extreme conditions. All the ingredients were there for an incredible viewing experience, with the unique landscape and extreme racing conditions,” added Alex Gechtman, regional VP sales Russia, CIS and Africa, LiveU.

Looking ahead, the Chinese part of the race is scheduled to take place in September 2018.