At the ADAC Rallye Deutschland in Germany, LiveU’s transmission technology was trialled by WRC Promoter, the company responsible for all commercial aspects of the FIA World Rally Championship (WRC), to help bring a fresh approach to its rally coverage. 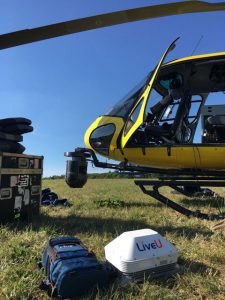 During coverage of the four-day event, LU600 HEVC-capable portable units were used for transmitting live footage from different stages of the rally, for interviews in the service park, and for file transfer from the field. The units were controlled and monitored remotely via the LiveU Central management platform by WRC TV personnel.

Previously, WRC Promoter had mainly relied on satellite and RF to cover the events around the world, with stages spread up to 250 km around the Service Park at each rally and has relied on motorbikes to deliver material from the field to the studio. It had been looking at ways to further increase the flexibility and dynamism of their coverage and to do so cost-effectively.

Based on industry recommendations and its own tests, the company turned to LiveU and its HEVC cellular technology, using it for the first time in Germany, working in HD.

On why WRC chose LiveU, Zion Eilam, regional VP sales (EMEA) at LiveU, told SVG Europe : “WRC Promoter, the company that’s responsible for all commercial aspects of the FIA World Rally Championship, became much more aware of LiveU following the success we had with the Wings for Life World Run this year. In scope, this was similar to what WRC wanted to achieve by working with us: a global event, with long transmission hours (where LU600 battery life comes into its own), on-premise installation of servers, a very high level of mobility needed in often challenging conditions with a big viewership. WRC Promoter studied this event and the fact we achieved flawless transmission and this encouraged them to try LiveU.”

LiveU bought time-saving to WRC’s live coverage, Eilam went on: “A key advantage was time-saving during the transmission. Being live and on the move and along a 400km route is not only more expensive with satellite but it’s also almost impossible to achieve the same level of flexibility and mobility. LiveU is fast to deploy, delivers the content reliably both live and using file transfer. Using our hardware-based HEVC technology ensured premium image quality too.” 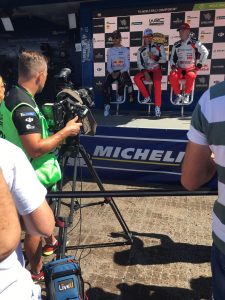 Training end users prior to an event and managing image quality in areas with poor mobile network coverage were the two key challenges for this event, and others, said LiveU

Training end users prior to an event and managing image quality in areas with poor mobile network coverage were the two key challenges for this event, and always for similar types of event, stated Eilam: “The main challenge in these type of events is training users in advance, getting them to fully understand and trust the technology so they can take complete advantage of it in a challenging environment. A LiveU team provided support on the ground and worked with users throughout the event to continue to expand their understanding and confidence,” stated Eilam.

Meanwhile, he added: “The technical challenge was providing the same level of HD image quality even in areas with significantly lower cellular coverage, which our HEVC encoder was able to deal with.”

Florian Ruth, director of content and production, WRC Promoter, said: “Using LiveU allows us to think about covering the World Rally Championship in a different way. It enables us to work in areas we have never been able to in the past as we have always had to think about transport and delivery of the produced footage. With LiveU we don’t need any exit routes from our stage positions anymore. Also, we don’t have to shuttle memory cards back and forth with helicopters or couriers as all this can be done by LiveU.”

The key requirements are mobility along with signal robustness, which LiveU provides. Ruth added: “The WRC is one of the world’s most challenging outdoor productions, taking place all over the world with each rally spread over four days with about 300km of competitive action and 1000km of driving in between stages. LiveU is the ideal solution.”

The World Rally Championship (WRC), recognised by the Fédération Internationale de l’Automobile (FIA), has a long and celebrated history, with 13 rallies around the world forming the 2018 series. WRC Promoter handles all the TV production, including all the broadcast formats, as well as the marketing of the series and sponsorship rights. It also works to increase the number of participants and explores new venues for the calendar.

WRC Promoter is now looking to expand its use of LiveU technology next season. Eilam stated that the company is unable to disclose when WRC plans to next use LiveU technology at this stage.