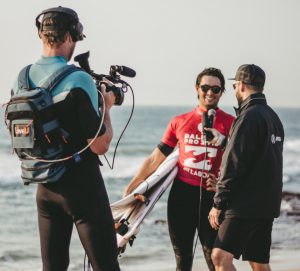 The international surf competition attracts The World Surf League’s top ranked performers, together with the cream of South Africa’s men, women and junior surfers, for this 14-day festival of high performance action in the waves of Willard.

LiveU’s portable LU600 HEVC units were used to provide comprehensive coverage of the main surfing competition and different aspects of the event, including extreme sports and music concerts. The event, presented by Billabong, was streamed live every day to the World Surf League website and Facebook page, which has over six million followers.

Roaming cameras with LiveU units were used on the beach, around the different venues, and even on a jet ski to capture the surfers riding the waves close up. LiveU facilitated more layers to the production with various multiple shots streamed live every day.

Greg Kitto, producer, Ballito Pro, said: “In the past, we were limited by fiber connectivity which meant we weren’t free to roam around. In this 50th edition celebratory year, we were determined to bring more of the event to our followers around the world. LiveU’s bonded cellular technology has offered us greater portability and reliability, enabling us to stream high quality video from new angles. The images have been amazing, enabling our viewers to experience all aspects of the festival online. We took the production to the water for the first time ever in a World Surf League QS 10 000 event and were able to show the beauty of Ballito from the surfers point of view. 2018 saw us increase our online viewers and attracted new TV audiences, with live feeds used by the international media.”

Yaal Eshel, VP Sales, LiveU, added: “We’re delighted to have an important contribution in this amazing sporting event in South Africa. Ballito Pro has all the ingredients for engaging an online audience, with its beautiful scenery, music, atmosphere and world-class surfing competition. Seeing the feed from our LU600 HEVC streaming live from the jet ski truly illustrates the power of the live experience.”