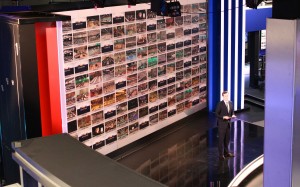 Sky News has again turned to video-over-cellular company LiveU to provide all-embracing live coverage of the UK General Election, which will be held this Thursday (June 8). Crucial to the order is the company’s ability to supply a very high volume of portable transmission units at short notice. LiveU’s UK partner, Garland Partners, is again overseeing this complex project.

Richard Pattison, Manager of News Technology at Sky News, said: “Our live declaration coverage in 2015 won huge plaudits and audience appreciation, a Guinness World Record for Most Concurrent Live Web Streams for an Event and The TVB Europe Best Live Broadcast Award 2015. The technology allowed us to bring results to the nation as they happened and this editorial advantage was made possible by our partnership with LiveU. It simply wouldn’t have been achievable using traditional newsgathering methods and now we are expanding our live coverage for 2017 to make the night even more alive for our viewers.”

Once again, Sky News will be using an IP set-up in a specially built studio – including a huge video wall for all the incoming feeds – then taking selected live feeds for broadcast via its Network Operations Centre. All live feeds will be available online via YouTube Live.

LiveU Central, the company’s unified management platform, will be key to the project. It provides those in the studio with both remote monitoring and control capabilities, providing essential access to units in real-time.

Sky News has recently expanded its permanent fleet of LiveU units, including the recently launched flagship LU600. Sky News has LiveU units across the UK and in Los Angeles, two in Washington D.C. and one each in New York, Delhi, Moscow and Jerusalem.

Pattison added: “Using cellular bonding has fundamentally changed the way we can approach news reporting and has considerably increased our live coverage because their technology allows us to broadcast from places we simply couldn’t before. With our foreign coverage, previously we would only have been live from our actual bureau. Now we can be out and about in the field with LiveU units getting us far closer to the story.”

Ronen Artman, VP of Marketing with LiveU, said: “We’re genuinely delighted to be working with Sky News again on a project of even greater scale than last time. For live events like this TV has real power, with YouTube providing flexibility for viewers and additional reach. We applaud the ambition of Sky News.”