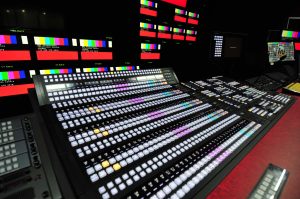 BBC Studioworks, a commercial subsidiary of the BBC, has re-opened the studio doors to the ‘home of British television’ at the Television Centre site in Central London. Television Centre, originally opened in 1960 and the biggest TV production facility of its kind in the world at the time, has been undergoing major redevelopment works since 2012 when it was sold by the BBC to the property company, Stanhope plc.

Studioworks has re-opened studios as well as post production facilities on the site to create the centrepiece of what promises to be a vibrant media quarter in London’s White City. Television Centre is now a mixed-use development and the studios sit alongside a number of outlets aimed at production crews, audiences and on-screen talent – including a Soho House club and hotel, a gym and spa, an array of restaurants and bars, as well as a boutique cinema.

The Studioworks facilities will play host to productions from all the major broadcasters and production companies, with ITV1’s The Jonathan Ross Show the first production to be recorded. Also booked for the Autumn are the BBC One quiz show, Pointless, and the Strictly Come Dancing companion show, It Takes Two. These two shows will account for over 120 episodes of television produced between late September and mid-December. Other confirmed shows include a brand new production for Sky – The Russell Howard Hour.

Across the three studios, Television Centre provides over 22,000 sq. ft. of shooting space as well as fantastic new post production facilities, all served by an array of technical and support areas. The revamped TC1, TC2 and TC3 studios range in size, and can accommodate all genres and styles of programming, from sitcoms and panel shows, to major entertainment and event shows – both live and pre-recorded.

The facility boasts a range of new technologies to the benefit of Studioworks’ clients, with major investments made in equipment ranging from 4K studio cameras to the latest in gallery control desks, helping to make Television Centre an industry-leading production hub.

From 2018, Studioworks’ Television Centre facility will also become the temporary new home for the ITV Studios Daytime shows, Good Morning Britain, Lorraine, This Morning and Loose Women. These shows are relocating from ITV’s London HQ during the redevelopment of the site and will be hosted in studios TC2 and TC3, live on weekday mornings.