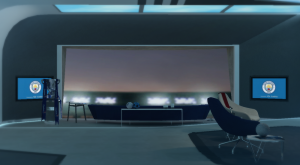 Manchester City is continuing to experiment with virtual reality with the launch of the CityVR app, available from the Oculus Store and developed in collaboration with LiveLike.

Following a successful public live VR trial in May 2016, which saw Manchester City, Sky Sports and LiveLike provide fans with the opportunity to experience a live Premier League match in virtual reality for the first time, Manchester City and LiveLike have collaborated again to bring the best of that exclusive VR content to even more City fans across the world.

Inside the CityVR Oculus app, which is enabled by a Samsung Gear VR headset, fans are transported to a virtual VIP suite where they can view highlights from a selection of Manchester City’s 15/16 home fixtures in immersive virtual reality. Fans can seamlessly follow the excitement happening in different corners of the pitch by simply looking at a camera icon placed in multiple locations, which instantly takes viewers to the corresponding camera angle.

App users also have access to a virtual dashboard providing player information and match statistics that deliver a deeper insight into the game at hand. In the Replay Centre, app users can enjoy some of Manchester City’s best YouTube content, including fan-favourite Pep’s Taxi.

Commenting on the new CityVR Oculus app, Diego Gigliani, senior vice-president of Media and Innovation at City Football Group, said: “Our trial with live VR last season was eye-opening, with fans reacting in awe of the immersive nature of the experience. With the launch of CityVR on the Oculus platform, we’re now able to let millions of fans around the world experience that same content also.”

Miheer Walavalkar, co-founder and chief business officer, LiveLike, added: “Working with Manchester City has been great for us and our collaboration last season really allowed us to showcase our live streaming capabilities to the broadcast community. With their help, we’ve now been able to create a tailored VR experience for their fans.”

Fans can access the CityVR app by downloading the Occulus App Store from Google Play and creating an account to which they can download the City VR app free of charge. Once installed, all that’s left to do is to slip the mobile device into the Samsung Gear VR headset and put it on to enjoy exclusive Manchester City content.