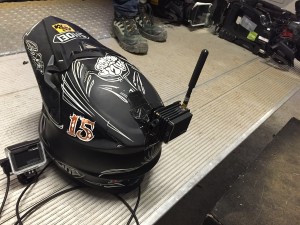 Despite the tragic events that took place in Paris and a nearby suburb resulting from multiple terrorist attacks on Friday 13 November, the Lille Supercross event went ahead as planned on 14-15 November. A large number of people attended the motorcycling championship, which was staged at the Pierre Mauroy Stadium, a venue normally used for Premier League football matches.

Broadcast jointly on L’Équipe 21 and the French and British channels of Motors TV, the Supercross was not produced by Euro Media or AMP Visual TV, but instead by Manganelli, a broadcast services provider from northern France. The fact that Manganelli’s company headquarters are situated nearby was surely one of the determining factors. However, its expertise in motor sports comprised a further decisive factor in the firm’s favour, says events department head Jean-François Petit: “We have been producing the Touquet Enduro race for three years and covered the first edition of the Supercross in the Lille Stadium [in 2014]” – the Supercross having taken place at Paris Bercy for more than 20 years up until 2013.

Inside the Manganelli OB unit, director Jérôme Ramos was in charge on the Saturday, but as he had to work on the Formula One Grand Prix for Canal+ on the Sunday Frédéric Fiolet (director of the Touquet Enduro race) took over his responsibilities.

Three Sony HXC100 cameras equipped with 100x zoom lenses were deployed inside the stadium. Also in use were two other Sony HXC100 cameras featuring digital triax technology and hand-held configurations. Another two wireless cameras were utilised on the field and in the paddocks. Additionally, a remote-controlled Sony XDCAM PMW 450 shooting 120fps was used for the close-ups. , whilst an HXC100 camera was used to film the commentator’s booth and the stand-up positions of L’Équipe 21. 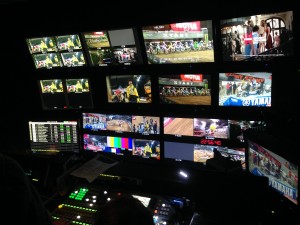 “The interesting fact about this production is that we were exceptionally able to equip one of the riders with a camera and we used a next generation GoPro with the latest remote control technology developed jointly by Link and GoPro – also a first for this type of event,” continues Jean-François Petit.

Manganelli knows the Pierre Mauroy Stadium well. It already has a NewTek TriCaster system in place to manage production for the giant screens that are installed permanently. It was therefore able to benefit from the existing fiber-optic network for the interfacing of its MediorNet boxes, provided by Riedel. In total, about twenty technicians worked for Manganelli on the supercross event.

“We are about to sign an agreement with other specialist organisations and we are preparing for the coverage of the 2016 edition of the Touquet Enduro to be held in February next year,” concludes the Manganelli events manager.

Although the services provider from Lille is a smaller company it continues to gain ground in terms of the overall sports broadcasting market share.

Let us hope that in the coming weeks and months other sporting events in France will not be disrupted, despite the inevitable uncertainty caused by the horrific events that led to 130 deaths and 382 wounded.