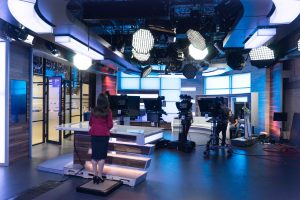 The Chroma-Q Space Force fixture has been selected to provide soft lighting for the studios of Wimbledon-based Marjan Television Network — one of the leading broadcasters to the Persian-speaking world with over 25 million viewers.

Marjan, which has just completed a major refurbishment of its studio lighting infrastructure, broadcasts a wide range of entertainment programmes to viewers across the globe. These include Persian-language versions of well-known British favourites such as The X Factor, Come Dine With Me and Spitting Image, as well as producing several hours per day of live output programming from its studios.

Amongst the various technical requirements for the studio upgrade, Marjan wanted a powerful yet energy-efficient white soft light which could deliver a high quality output with good colour rendition on camera.

Despite weighing in at only 8kg, it has an internal ballast and passive cooling (no fans), which renders it very quiet in use. Like other Chroma-Q fixtures, it has variable PWM which gives it flicker-free operation, and it can be wirelessly controlled.