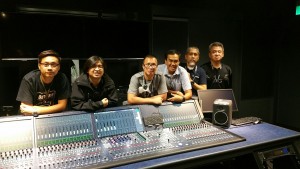 MediaCorp is a conglomerate of companies that is active in television and radio broadcasting, interactive media, filmmaking and media publishing. The MediaCorp Campus is now its main production facility, and incorporates several TV and radio studios, and a number of control rooms. Here, MediaCorp has chosen and installed a large amount of Lawo equipment for two TV Production Studios, three TV News Studios and a Radio MCR. Additionally, Lawo’s VSM (Virtual Studio Manager) Control and Monitoring System provides the overall control layer across the newly built TV and radio facility.

The benefits of pairing the Lawo systems with VSM include Distributed Studio Networking (DSN) and easy handling of workflows in the studios. Where many central resources are shared – telephone hybrids, DeEmbedders, RX Lines etc – each studio has access to these in addition to its own local resources. Leveraging all of these resources provides greater operating flexibility and efficiency – all accessed and operated intuitively via VSM using simple keystrokes.

The MediaCorp news area uses this approach but with some enhancements. The news editing area comprises four FlashCam positions covering the four main languages spoken in Singapore (Tamil, Malay, Chinese and English), and is equipped with Lawo A__mic8 audio-to-IP units that support up to eight microphones and four return lines. These four positions can be freely assigned to any of the studios or SCRs. The news studio required the greatest technical consideration from Lawo, as its workflow had to be tailored to the customer’s desires for flexible and speedy action.

The signals from the mc²56 consoles are routed to a central NOVA73 HD, each with 256-channel tieline capacity. The Nova73 HD is located in the studio equipment room and serves as the central router for I/Os across all of the studios, as well as providing control of signal distribution, and is equipped with a redundant control system, 128 AES in/outs, and 16 MADI and 16 RAVENNA ports. Connection to the intercom system, HDD recorders and auxiliary equipment is provided via the Nova73 Compact in the medium sized studio.

For the large studio, the Nova73 HD located in the Studio Equipment Room is in charge, using three MADI ports. In addition, a Lawo V__pro 8 is used for embedding/de-embedding audio from HD/SDI signals, and is addressed from the router. Four MADI links connect the Toggle Studio to the Nova73 HD core – Toggle is the MediaCorp Apps service that streams additional content and accompanying broadcasts such as VOD.

All of the Lawo audio equipment and intercom systems in the news TV studios is connected via MADI, except for the FlashCam Studio, which uses Ravenna.

While all audio signals within the new facility are controlled using Lawo’s VSM control system, the Lawo consoles can also be managed remotely using Viz Mosart broadcast automation. Each system has its own dedicated conference resources (hybrids, Skype codecs etc) but, for greater flexibility and efficiency, there is a pool of shared resources which are physically connected to the central router and can easily and quickly be assigned to each of the consoles via the VSM.

Further, the four FlashCam positions in the news offices can be assigned flexibly and easily to each of the four mixing consoles. The news system is on air 24/7, and relies on Lawo’s established system stability and reliability.