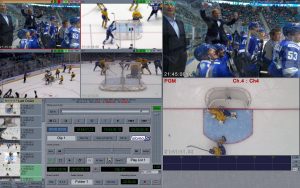 Ahead of IBC 2017, slomo.tv announced the successful completion of a project that saw its technology used to televise the President’s Ice Hockey Cup in Kazakhstan.

Besides supplying the equipment at very short notice, slomo.tv also organised full user training for the Media Sport team. Removing any risk for the production team, slomo.tv also provided engineering support for the Cup Opening Ceremony and the first day of matches. The support engineer’s presence turned to be more luxury than necessity, since the Media Sport operators sailed through the event and slomo.tv’s shadow specialist was not required at all.

“The mission of our company is to deliver sport programming of the highest quality to national and international audiences. The ice hockey teams that we support include Barys, Snow Bars and Nomad as well as other sports, such as boxing and wrestling,” commented Valentin Gladkov, CTO at Media Sport. “We selected slomo.tv servers for a number of reasons – their high quality picture and robust performance combined with a very intuitive user interface, which helped to familiarise our operators in the very short time – in fact, in a few hours.”