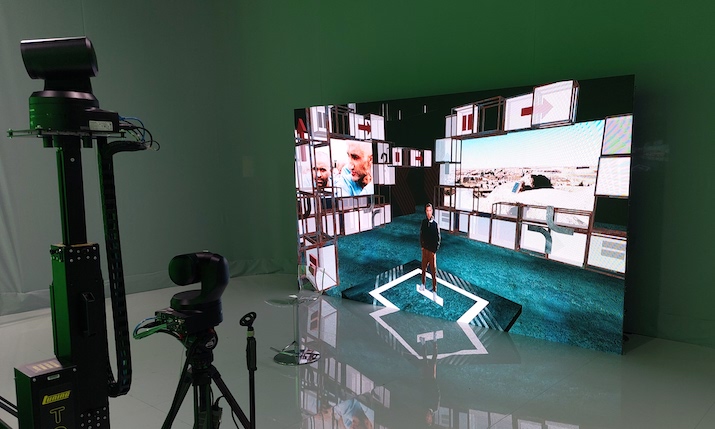 The studio is being used for the creation of small columns, inserts and teasers

Italian commercial broadcaster Mediaset has invested in a new graphics system from Tuscany-based ClassX. The move marks Mediaset’s first independent foray into virtual production. In the set up phase, the studio has been named Studio Light; when it is fully operational it will be known as Studio 4.

Massimo Vedovello, a designer in Mediaset’s production and broadcasting technologies department, sets the scene: “The project was born from a very simple basic idea; we wanted to tackle, at a group level, the complex universe of virtual production; therefore we proposed new ideas based on a virtual set. At the same time, we needed to simplify everything as much as possible, and make costs more efficient. We wanted to enable intensive and cross-departmental use of this new structure that could reflect its agility across all departments and perform the functions of beta tester for the widest possible range of applications.

“The idea was to allow extensive experimentation and to create a ‘smart’ structure that, in a short time and with reduced staff, could return very interesting results from the point of view of creativity. In this way, it would respond to the dynamism of new generations of Mediaset directors and authors.”

Launched in mid-April, the studio was subject to numerous demos which revealed its capacity for use on various fronts. More generally, this new ‘light’ configuration, which relies on point tilt zoom (PTZ) cameras, responds to new advanced production needs.

Agility, rapid reconfiguration and the ability to deal with applications in several programming genres is often required by Mediset as it produces a wide variety of programmes, while always maintaining HD quality. This new venture affects all sectors, from entertainment and sports to fast and streamlined news programmes, with the space lending itself well to graphic experimentation and lean productions in order to respond to today’s production needs.

Mediset does have some history in virtual sets. During the 2018 FIFA World Cup, it created an augmented reality setup for its Tiki Taka football programme in Studio 11. However, the service was external and, in addition to the need for a long and complex preparation process over a period of two weeks to place all the sensors and more, the level of production was high, as were the costs.

Today, however, the installation carried out by MediaPower, and the setup of the new studio, respond perfectly to the initial brief that asked for a product based on an excellent quality-to-price ratio, which could be balanced with PTZ cameras at an affordable price. 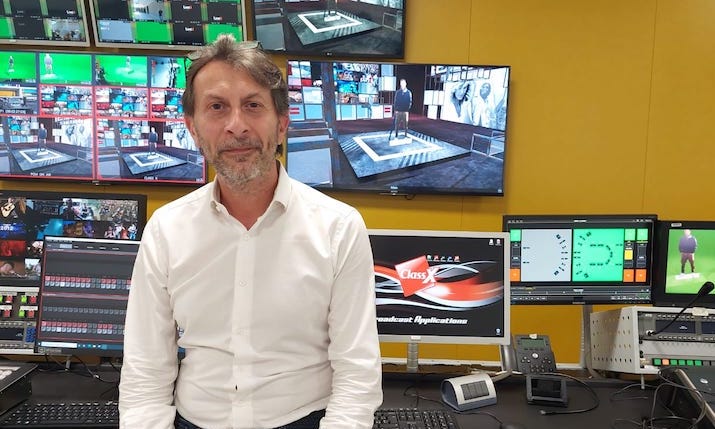 Vedovello continues: “The important thing was to ‘design the perimeter’ or to understand how far such a system could go. From the first weeks of testing we were all very impressed by the actual possibilities and our idea of ​​being able to offer creatives a series of spectacular new options within a controlled budget proved to be really successful, impressing all those who came for the demos.”

“Today it is essential to reduce production costs and optimise everything, while maintaining the highest quality and practicality of the productions in the studio,” he continues. “Historically, the project was born from a first phase, about a year ago, where it was thought to work with NDI signals. However, Mediaset has long started to create a complete infrastructure in ST2110, therefore creating an island with augmented reality and a virtual set in NDI would have required the integration of many other devices with high conversion costs.”

In the end, the project is based on three macro blocks: the virtual reality engine based on ClassX equipment, the software implemented by MediaPower, plus a robotics block based on a system made by Tecnopoint. The heart of the system is Panasonic’s Kairos live production platform, which is able to manage all signals in 2110, including those in SDI.

Tecnopoint robotics integrate well into virtual reality, as these shooting supports are able to regenerate a known protocol that manages all the localisation information in the space to be sent to ClassX, which in turn is able to interpret the data correctly.

The intention with Studio 4 is to gradually create graphics inserts in the virtual set and then it will pass, in the second instance, to augmented reality. In the initial phase, it will be used for the creation of small columns, inserts, teasers, contributions for the news segments of sports programmes and so on.

The rectangular studio set is divided into two: on one side is the green screen for virtual reality (VR) and augmented reality (AR), but in front of this a large LED wall is installed which, if needed, can act as a backup for other studios, even with the addition of AR.

By reorienting the remote PTZ cameras and putting a journalist on the set, it is possible to switch from virtual reality to augmented reality and, always integrating with ClassX, easily change the way of producing. The studio is completed by monitors and multiviews typical of classic TV production. 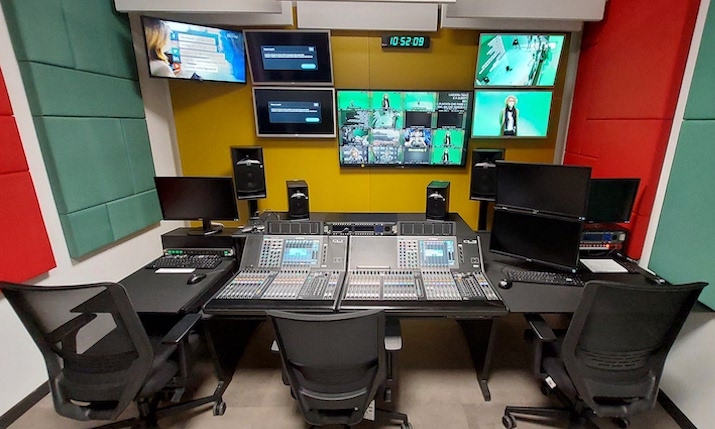 The workstation, or machine for rendering and managing all the graphics, was installed by MediaPower. A rack-mounted PC is sized to receive five HD signals. In this case, three are the remote cameras on track and pan-tilt, using Tecnopoint robotics; two further external signals can be inserted at will.

The output of the workstation is in SDI and conversion takes place through an Evertz gateway, from copper to fibre ST2110, so that everything that enters Kairos is in the 2110 standard. The separate audio control room contains Yamaha CL1 and CL3 mixers.

The ‘light’ studio was conceived for recorded programmes but can easily go live as well.

With this project as with others, Mediaset always tries to create a partnership relationship with technology suppliers such as MediaPower. Vedovello confirms: “It’s a strength I want to be able to count on and I like it when I see that the team works. I must admit that even in this project we managed to have a good level of flexibility: it is not always easy to match some mechanisms and the beauty of this achievement for me is being able to say that the collaboration has been excellent.”