Remote production has been the solution to many a sports broadcasting challenge during the coronavirus pandemic, and none more so than for Mediapro who adopted a distributed workflow to allow it to make a studio-based LaLiga show for Facebook in the Indian sub-continent.

‘LaLiga on Facebook Watch’ includes pre and post-match analysis of the LaLiga match week and is hosted from an interactive set located in Barcelona by commentator and presenter Joe Morrison and features football pundits from both Europe and Asia. Its USP is that it allows fans to interact through polls and comments in real-time.

Given the security and mobility restrictions enforced because of COVID-19, and the impossibility of both the presenters and the show’s other pundits travelling to Barcelona, the programme had to reinvent itself. This was done through the addition of a group video call, mixing the three signals and creating a new programme feed.

The resulting production workflow takes a signal journey spanning 30,000 km. It begins in Dubai and travels to England and Germany, where Morrison and the two collaborating pundits meet, before travelling to Barcelona where the programme signal is produced.

The signal is then sent to the Facebook servers in Los Angeles, where it is distributed to all the countries on the Indian subcontinent.

In a video call last week (8 July), Morrison said the show’s USP is the direct fan engagement and it was important that this was maintained, even if the show was being hosted from home.

“What I was scared about was losing the fans and that USP,” he said

“We have built-up a familiarity and I wanted to keep that, especially the studio [element]. Video calls are great for meetings but not for broadcast. You don’t get the energy. The biggest challenge is the debate and argument. We are not just doing questions and answers [like many football shows]. I am not interested in that. We have to create a debate that turns into the argument that the audience reacts to. Thankfully, we’ve kept the main elements.”

“You want fans to feel that nothing is different. The most important bit of all of this is them being able to get their comments into the show and for us to react to the comments – and for them to see what they normally see: which is debate.”

Technology partner GUUD manages the fan comments and polls using a system that can be operated from anywhere in the world, which makes the workflow possible. The presenter Morrison has a tablet computer that provides him with access to the interactions, allowing him full control of the show, even from home.

“You want fans to feel that nothing is different,” he continued. “The most important bit of all of this is them being able to get their comments into the show and for us to react to the comments – and for them to see what they normally see: which is debate.

“I had to train the football pundits. I encouraged them to use their hands and use the camera. The frames are very tight. We did quite a few training sessions. We are used to interacting with human beings but in this situation, you are interacting with a camera – and remember we are all on different timezones. Everyone has a different body dynamic and a different mood. Trying to keep that dynamic is important.”

Natxo Imaz, digital projects chief technology officer at Mediapro, who managed the workflow said that his team “needed to be creative with technology.”

“It was very difficult for us. We didn’t have a lot of time. This was a totally new workflow. We needed to handle a lot of feeds and make it look natural for the viewer at the same time. I think we did it. It was a pretty cool workflow [in the end]. 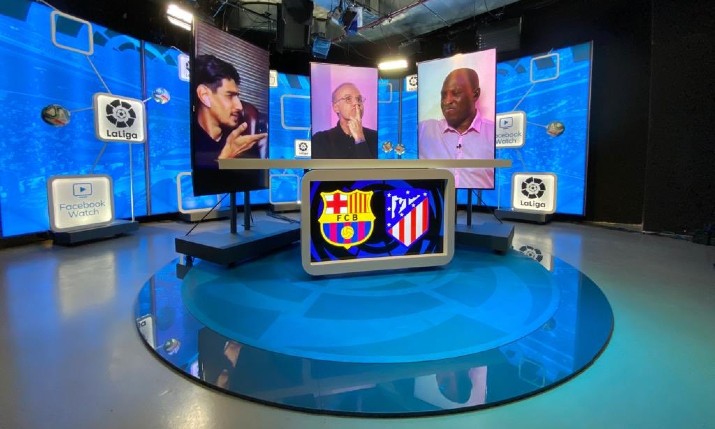 In Asian countries such as India, where LaLiga is broadcast on Facebook, an increase of over 72% was detected.

Also on the video call, José Antonio Cachaza, LaLiga India managing director, revealed that the league was reaching an increasingly younger audience by using Facebook with 82% of viewers under the age of 35.

Facebook currently has the rights to show LaLiga in India, Pakistan, Bangladesh, Sri Lanka, Afghanistan, Nepal, Bhutan and the Maldives.