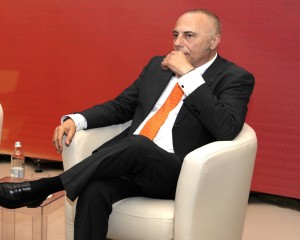 As part of an ongoing, long-term association with the UEFA Champions League, Italian media company Mediaset has exclusive broadcast rights for the next two editons of the tournament with its on-demand pay TV service Premium. Yves Confalonieri, editorial content director, says: “For us it is clear that the Champions League is not only an investment in TV rights, although [it is substantial in that regard]. It is also a really big event! In fact ,not only does it involve the transmissions of the matches in high quality, as well as the entire event management, such as pre- and post-match coverage in the studio. We have added new talent to our team, and we want to [capture] the excitement typical of a stadium.”

Fabio Cazzaniga, director of sports productions for the channel, says: “I am managing a team of 45 people with executive producers and an international office that oversees the management of the UEFA contract with all technical specifications (broadcaster manual). Some 145 matches are to be produced and in Italy and we also have an obligation to produce all the matches of the Italian teams (Roma and Juventus). Besides that, we have the ability to integrate all the other matches abroad, e.g. customise the international clean feed with Italian content.”

“The commitment is considerable and, for example, in the customisation we were asked for a dedicated camera shooting only footage to be relayed to the studio in Milan that handles pre- and post-matches, showing images on special monitors walls within the sets and returning a stadium feeling. This camera is usually placed on the second row, of seats so we are able to bring the viewer more and more ‘inside the stadium’.”

“Mediaset utilises OB vans to broadcast the international clean feed and even a smaller mobile vehicle to achieve customisation for Italian broadcasts. For example, at the recent Roma-Barcelona match, we deployed 135 people – talent, technicians and operators – and two control rooms, one dedicated to the international signal and one for the exclusive personalisation of the national signal.

“In addition, we defined that when our teams play abroad, the people involved in integration numbers around 35, and we employ more than six cameras. We want to be less American-style and more Italian to enhance the product we have, respecting the Italian character of the parent company profile Mediaset.”

Whilst UEFA indicates a mandatory minimum of 14 cameras, Premium executive director Luca Festa says that the broadcaster deploys many more – up to 23 games in the case of the aforementioned Roma-Barcelona match.

“Euroscena from Rome is the tech service company that was chosen to cover Roma Barcelona and many other sports events,” says Festa. “In addition to a Spidercam system we add a Hypermotion, always ensuring maximum coverage on the back goal vision and the front; then we use two steadicams, two cameras in reverse shots that capture the reactions of coaches etc, plus two cameras pointed directly at the public for ‘fan reaction’.”

The Sports Agency, the editorial working group of Premium, not only has to concern itself with feeding the various Premium sports channels, it must also produce stories for TG5 news and various contributions for Italia 1, as well as everything broadcast on the FTA channels.

The UEFA today requires continuous recording of all cameras in XDCAM Isocam since they produce a video magazine covering the Champions League.

All the signals of the cameras are recorded simultaneously and the two vehicles talk directly to each other on the network, so each image from the two vehicles is available to the other and feasible for broadcast.