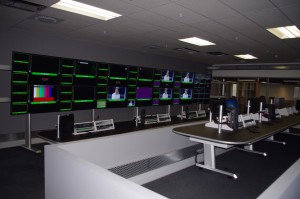 Systems integrator and mobile broadcast production specialist Megahertz has been given the responsibility of moving South African broadcaster e.tv to its new home. e.tv has been based in Longkloof Studios since its foundation in 1998, but is now moving to a purpose-built facility five kilometres away across Cape Town – and at the same time switching to an all-HD operation.

Today e.tv broadcasts eight channels. Its core facilities also include programme ingest, editing and graphics, a busy newsroom and three production studios. The challenge for MHz is to move the complete operation to the new facility without impacting day-to-day operations.

“We have been working with e.tv on the move right from the start – advising on civil engineering issues like studio floor construction and soundproofing,” said Don Wilson, Megahertz project manager. “We have also catalogued all the existing equipment, advising what could be upgraded to HD and moved, and where we need to plan for new hardware.”

The Megahertz team developed the new system design, and provided advice on what new core equipment would be required. It has also liaised with the transmission partners of e.tv: Platco, Globecast and Sentech, in order to achieve a seamless transition.

The project sees the installation of a substantial amount of infrastructure, including two Grass Valley Miranda 8000 routers: one for lines traffic and a larger router for all the transmission traffic. Much of the modular infrastructure comes from Axon, including synchronisers, converters, multi-viewers and transmission switchers.

The new facility features a central control and monitoring system, also from Axon. e.tv was an established user of playout automation from Pebble Beach, and the project also involves updated Marina, Neptune and Anchor systems from the company to meet the extended profile.

“Any project which involves picking up eight busy channels and moving them across town is always going to be a challenge on a knife-edge,” said Dave Stewart, group head of technology for e.tv. “Even while the planning and moving is happening, we still have a station to run and channels to put out. So we needed a partner we could trust to come in and take responsibility for the move.

“Megahertz has always been grounded in solid, practical broadcast engineering skills,” he said. “We have worked closely together, of course, but I have been able to let them get on with the job safe in the knowledge that they had anticipated all the problems and pinch points. I’m sure the move will be seamless.”

Megahertz intends to complete the move to e.tv’s new base at the end of August 2015.