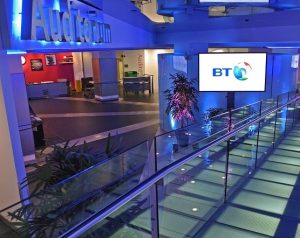 Systems integrator Megahertz Ltd. has announced that, following a competitive tender, it has been chosen to drive the complete redesign and 1080p capable infrastructure upgrade of the studio and auditorium facilities at BT’s corporate head office in London. Work started in early August with only a 5-week window for completion.

Not only is the systems integrator upgrading the facilities to full HD, it is simplifying both the studio and auditorium infrastructures via a complete system refit and rewire to provide workflow and energy efficiencies, free up rack space and streamline support and fault finding tasks. A new communications matrix, timing synchronisation system, plus conversion, jackfields and monitoring equipment is to be rolled out across both locations as part of the upgrade.

Megahertz was selected on the basis that it has a proven track record, innovative ideas and the capacity to meet BT’s specified technical and commercial requirements.

“Megahertz has supported our facilities for over 10 years and they have always provided a first-class service, not only on installation but also in responding to technical challenges that arise,” said Paul Groves, auditorium manager at BT Group Communication Services. “Megahertz has a thorough understanding of the facility and the equipment in it, having previously conducted a full infrastructure survey. We are very pleased to be working with the Megahertz team once again to make this exciting upgrade a success.”

A number of existing hardware systems are linked and serve both sites, so Megahertz’s duty is to minimise disruption to the auditorium while working within the studio. It’s vital that there is no loss of service to the auditorium or other areas that feed in and out of the studio, such as the production office, media suite, web MCR and Green Room. This called for meticulous planning and organisation, including extensive prefabrication ahead of installation.

The BT Centre studio, which is used to record and package corporate videos for BT’s internal social media channels, as well as provide live links into all Business Channels, such as Bloomberg, CNBC, BBC News etc., is replacing its existing SD-SDI camera chains with three Hitachi HD SK-1300E camera chains and all cabling and connectivity will be re-designed to handle 1080p 3GHz. Video and audio monitoring within the studio control room is also being upgraded to function at 1080i: A Calrec Brio-36 digital audio mixing console and a Trilogy 24 Port Messenger talkback and communications system will not only serve the studio area, but also the auditorium upstairs. Additionally, a new Autoscript prompter system from Vitec Videocom and an AJA RovoCam beauty camera is being incorporated as well an AJA Ki-Pro Ultra for 1080p recording of ‘green screen’ productions, alongside an existing bank of five Ki-Pro Rack recorders.

With its own gallery, the 170-seater auditorium is used to capture live internal corporate presentations, communications and events. The auditorium is also incorporating an existing Evertz VIP Multiviewer to provide the monitoring capabilities across legacy and new equipment and it will integrate with the auditorium’s existing AV equipment, some of which is already HD capable. An upgrade of the digital video and analogue audio matrix which, together with the replacement of the infrastructure glue with the Ross Opengear platform, will also bring equipment in line with the studio upgrades. Additionally, Megahertz is modernising the auditorium lighting rig to incorporate an energy efficient LED-based system in support of BT’s commitment to reducing its carbon footprint.

“We are delighted that BT is once again placing its trust in us to deliver this large-scale upgrade,” commented Steve Burgess, CTO of Megahertz. “The entirely revised design for both sites will transition both facilities to a 1080p capable workflow while making the resulting infrastructure more compact and efficient.”