Mixing up the sound: INA TV A1 Yannis Petrakoyannis on the 2022 FIFA World Cup qualifiers 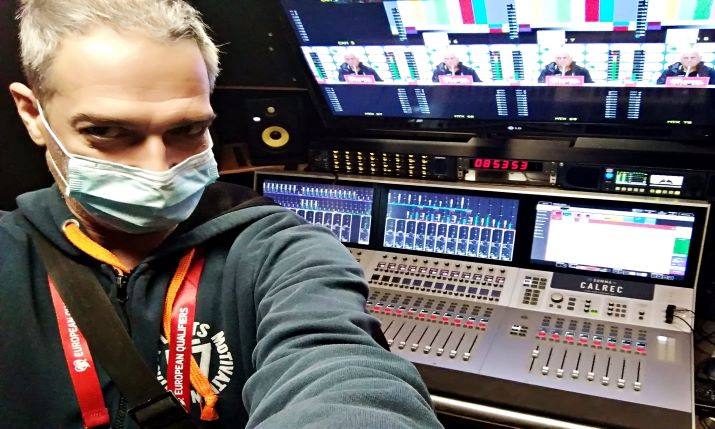 INA TV A1, Yannis Petrakoyannis, with the Calrec Summa console he used during the FIFA World Cup qualifiers

SVG Europe caught up with Yannis Petrakoyannis, an A1 for Greek independent full-service company, INA TV, to find out about his experience of working on the World Cup football qualifiers, as well as the ins and outs of the audio technology he used on site.

You’re a sound engineer with 25 years of experience in the industry. Can you describe your background for us? What roles have you had and what high-profile projects have you worked on?

I started many years ago as a F.O.H. sound engineer for a PA rental and installation business (for live bands, dances, clubs, theatres, shows, galas, presentations) and I was also running my own recording and production studio suite.

“As a host van we have up to 16 condenser mics around the football field and one cam-mic on each steady or portable cam over the pitch area. There can also be mics on some specifically positioned cameras covering the crowd, the action on the field, the teams and the pitch entrance. This is the so-called ‘international sound’ group of the game and it’s routed on specific audio channels for transmission to clients”

Over the last seven years I’ve been working on TV and broadcast productions. I’m located in the north of Greece and I’ve been involved with many live shows and projects. I’m working in TV as an A1 sound engineer and assistant, mainly using OB vans to cover major social, political, cultural, and sports events all over Greece and sometimes other European countries.

When did you start working for INA TV and what does your current role with them entail?

I started with INA almost seven years ago, first as a sound engineer assistant but I soon developed into an A1. I’m qualified to operate on five OB vans out of INA’s big fleet.

With 30 years of experience, and by covering some of the most prestigious events around the world for major international broadcasters, INA TV is one of the leading independent full-service companies in the broadcast business in Greece and across the Balkan and South West Europe region.

INA specialises in satellite and streaming services, production and broadcast solutions for all kinds of events, including news, sports, business and entertainment, special events and corporate TV conferences. INA TV also produce film and documentary, as well as provide independent and reliable services for event organisers, rights and non-rights holders and has been present for event coverage in over 30 countries worldwide.

You’ve been covering the World Cup football qualifiers with INA TV’s OB units. Did they build a special truck for this or are they using one that was already in their fleet?

The truck that is being used right now for UEFA is a three year-old OB van, which was chosen and customised for the demands of those high-level production services. It can manage more than 16 cameras, has at least two video and replay servers running, HD, 4K and Dolby sound, optical, wireless, ethernet and IP connections and comms, and of course a Calrec Summa! 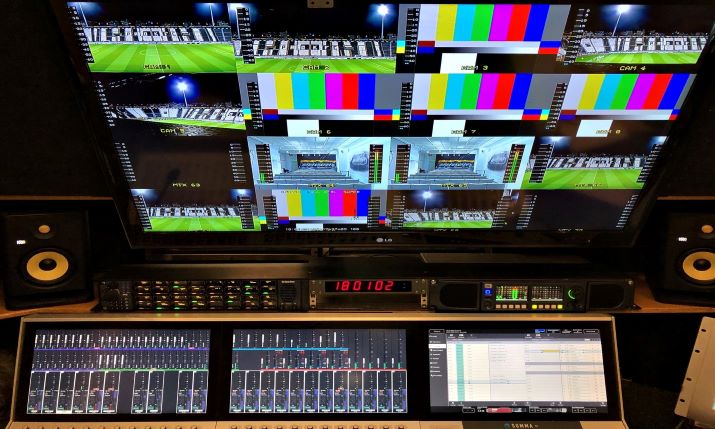 How many football matches have you covered so far and how many more do you have coming up?

Each year and each season has different broadcast and production programmes and schedules. It depends on company contracts and assignments and on media platforms and networks and clients.

In 2021 we exclusively covered the entire Super League 2 (SL2) Greek football championship, lots of Greek basketball and volleyball games, other major sport championships and games and many political and cultural events.

For UEFA we are covering the home games of the Kosovan national football team for Group B of the European qualifiers for the upcoming World Cup. We’ve been visiting Kosovo throughout 2021 but over the years, INA TV has travelled all over Europe to service many European and international broadcasters and media clients.

Specifically, what Calrec technology and consoles are you using and how does it interface with other audio equipment that you’re using for the football matches?

This OB van has a Calrec Summa with a 24+8 fader board and two x Br.IO expansion racks on a Calrec Hydra2 network. The DSP core has double modules for total redundancy. The audio connections are either analogue or digital over AES.

The OB van has three I/O sound board panels inside and outside, three patch bays and three audio multicores on motorised reels. Then there’s Ethernet and LANs for IP and network connections, intercom and IFBs.

As you can see, it’s quite complex but the Summa can handle all the traffic and the audio production like a charm and still has more to give and more capabilities if needed.

Can you describe the audio technology workflow in the van? What feeds are you mixing? Crowd noise? How many microphones are you using?

Each production has a different approach, design, and workflow. For UEFA’s football games the broadcast procedure has a quite tight protocol provided by UEFA which includes the audio requirements, the transmission channels and the feeds.

A single football match can be covered and broadcast by multiple OB production vans. One is always the host, and if no other production van is present the host must also carry and transmit all the feeds, the IFBs, the codecs, the commentary and reporter lines and all the position and location sounds of the game to all clients.

This is something we’ve been asked to do; as a host van we have up to 16 condenser mics around the football field and one cam-mic on each steady or portable cam over the pitch area. There can also be mics on some specifically positioned cameras covering the crowd, the action on the field, the teams and the pitch entrance. This is the so-called ‘international sound’ group of the game and it’s routed on specific audio channels for transmission to clients.

We also have to cover the teams’ arrivals, the press conferences and training on the pitch. In the case of commentary and pitch reporter services for transmission feeds, we’re using between three and eight more audio input channels, and maybe another two for flash interviews or any other positional use.

We also cater for up to four more IFB channels (in total we may use up to eight IFBs), one or two telephone or VoIP/ISDN codecs for communication with base studios, and whatever else may be needed.

As I’ve mentioned before, the in-van connections, feeds, cues, tie-lines, monitoring, recordings and playbacks, Dolby system, transmission channels on all four embedders and anything else that involves the sound environment, plus the transmission procedure, uses a large number of audio channels, busses tracks and paths. Distributing, patching, routing and mixing those signal and feeds is complex and demanding and I can tell you that all 48 analogue, 16 digital inputs and all 32 analogue and 16 digital outputs on the 2 x Br.IO IO units are always patched and fully working! All the Summa’s busses and all four mains are pretty busy too!

What audio feed sources are you actually mixing and what are the key challenges when you’re mixing a football match?

When mixing for a host OB van, commentators, pitch reporters, codec’s and hybrids, tie-lines and direct outs and other material are not present on the programme output on the Summa’s mains, so they’re not mixed on-air. They are “passing through” the mixer to individual IFBs, busses or tracks, and they’re routed to specific outputs, destinations and transmission channels on embedders or out of the van to other destinations.

We’re only hosting those signals and sending them to clients, providing proper routing, signal integrity and quality. For this I’m mixing on-air the main programme feed and using the Dolby 5.1 system to create the international sound mix. The international sound has no commentary, it’s just ambient sound, so the idea is to follow the on-air camera and the main programme view, providing the audio from each source to sonically describe the match. You need to create a sound mix that explains the game.

Mics are also panned across the stereo field and they’re routed to the 5.1 Dolby encoders. Some mixing is also needed on some aux and groups and IFB busses and for the recording and playback servers. EQs and dynamics are always active on every channel, bus and output.

When I’m not mixing for a host OB van but for a specific sport or TV channel or media platform, I have to mix in the commentators, pitch reporters, interviews, guests and all the programme material from the stadium. In that case the international sound mix is provided from the host OB van.

How are you using the Calrec Hydra2 network; what is it connected to?

We are using Hydra2 with 2 x Br.IO rack expansion modules. They are also used for redundancy. We’re planning to use another Br.IO for outdoor use mainly for the stadiums and the pitch area to maximise the ins and outs and minimise the analogue connections. The most important thing is that we can 100% rely on Hydra2 and the system’s modules, and we can expand it in the future with absolutely no worries. It just works.

We’re broadcasting in whatever format is required, but usually HD, 4K, with 5.1+2 Dolby and multichannel sound, MPEG4/1080i, 16:9. Other formats or conversions for any use (ie, live streaming) are also supported as required.