Major League Baseball has announced that MLB Advanced Media (MLBAM) will launch a virtual-reality app for Google Daydream on June 1.

Leave your preconceived notions at the door, however: MLBAM is not getting into the business of producing games live in VR. Instead, the MLB Gaming and VR teams have built a unique experience around data virtualisation.

“We truly believe here at MLB that the next frontier for data visualisation will be immersion, allowing the fan to get inside of the data,” said Jamie Leece, VP, games, MLB Advanced Media. “VR empowers us in a way that no other medium does to let the user dive into the data and experience it in a whole new, profound way.” 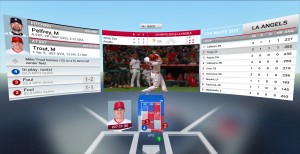 Inside the At Bat VR experience on Google Daydream. The app debuts on June 1

With At Bat VR, users will be able to consume live games — and many of the data-filled features MLB.com fans have come to expect — in a new way. The app offers a fully immersive, 360-degree environment in which users can access a 3D strike zone (that will make statheads drool), historical and real-time Statcast-powered data, and interactive information like scores, stats, and standings. An MLB.TV subscription also unlocks premium video options including live-streaming games and full archived games with DVR functionality.

Few entities do data and data visualisation better than MLBAM: its longtime commitment dates back to Gameday, Pitch f/x, Statcast, and more. At Bat VR packages all those hits in a cutting-edge environment.

“At Bat VR is built on the backs of giants,” said Jason Schreiber, director of development, Gaming and VR, for MLBAM.

Again, the games themselves aren’t in VR, and MLBAM has no immediate plans to produce and distribute a baseball game live in VR. In fact, the MLB VR team was upfront about the challenges that the playing dimensions offer for baseball and VR. The app does feature some 360-degree VOD content to dive into, though. Earlier this year, MLBAM produced a captivating presentation of the first home game at SunTrust Park in Atlanta, and MLB.com was nominated for a Sports Emmy for its VR productions of last year’s postseason and World Series.

As for the At Bat VR app, there are plans to bring it to other VR-capable platforms, but the debut is exclusive to Google Daydream. MLBAM has a longstanding relationship with Google and was an early access partner when Daydream launched in the fall. The first iteration of Daydream offered a VR production designed by MLBAM around the Home Run Derby.