All-Star games always provide broadcast partners and leagues with a chance to push the boundaries when it comes to bringing fans closer to the game. And so it was with the 2019 MLS All-Star Game on July 31 in Orlando, Florida.

Zachary Kenworthy, senior coordinating producer, soccer, Fox Sports, and the rest of the production team made use of a Skycam, miked-up players, cameras in all four corner flags, and other technology to immerse viewers.

“The MLS is a great partner,” said Kenworthy, “and they give us a lot of leeway to figure things out so we can bring viewers closer to the action.” 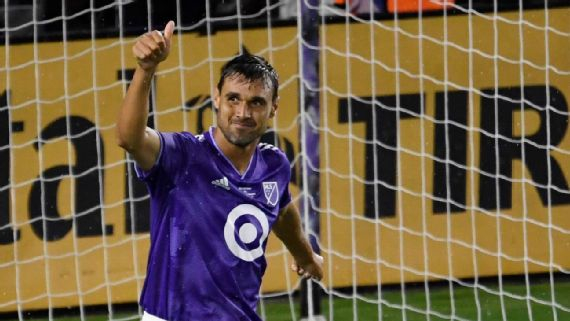 It was also the first MLS game broadcast in UHD; cameras shot at 1080p HLG and with expanded 2020 colour space. It was also the first time an MLS game was done with a completely IP truck: Game Creek Video’s new Bravo unit. Sony HDC-5500 cameras were used, along with EVS XT VIA servers and Lawo routing.

“It was a combination of doing two things at once: HDR, which is never easy, and dealing with an entirely new routing infrastructure,” said Mike Davies, SVP, technical and field operations, Fox Sports.

Last year, Brad Guzan was miked for an on-field interview. This year, he was joined by Chris Wondolowski, Walker Zimmerman and Paxton Pomykal. Orlando hometown star Nani wore a mike during warmups only. All five players wore IFB earpieces and two-way microphones from Quantum.

“We pushed the envelope two or three times and opened up the microphones to more than one player at a time,” said Kenworthy. Mics for Wondolowski and Guzan, who was in goal, were opened up at the same time so that they could converse with each other as well as with the announcers.

“We hope to build on that in the future,” said Kenworthy.

Another first was the deployment of Admiral Video cameras in each of the four corner flags. “We were able to use all four multiple times,” he noted. “We could cut to the camera and be right in the player’s face.”

The Skycam worked out well during coverage of the game, according to Kenworthy. “It’s always a useful and fantastic tool to have,” he explained. “It allows the way we cover the game to get so much bigger.”

Using the Skycam to cover the miked-up players also proved fruitful. “There were moments when Zimmerman would be on the goal line and watching plays ahead of him,” said Kenworthy. “We would pull the Skycam back and hover over him while he was discussing the game. It was a nice perspective.”

Player miking during a regular-season game would have to overcome a number of hurdles, he notes, but, given the positive reaction, they could become a part of pregame warmups.

“Audiences can’t get enough of being able to hear from their players,” Davies added. “The work we did with NASCAR over the years really led the way and helped us formulate a new strategy to bring this to other sports. It’s a unique opportunity to get some awesome access with athletes who have great personalities off the field and can now demonstrate it on the field. By becoming part of the broadcast, they can explain what is going through their mind, and the response has been very positive from players and the MLS.”

Audio has always been a big initiative at Fox Sports, going back to the days when then-Fox Sports chairman David Hill would make sure that college marching bands were heard in their true glory during college-football coverage. This year, that enhanced philosophy spilled over to the MLB All-Star and MLS All-Star Games, which Davies said provides the kind of access needed to move forward.

During the MLS regular season, sideline reporters do interviews with players just seconds before the kickoff, and the audio extends beyond interviews. Soccer fanbases are known for their chants and songs, which can be a factor all match long, and making sure as much of that atmosphere is covered by microphones is a big initiative.

“When you go to an LAFC game [in Los Angeles], the in-game atmosphere is insane,” said Kenworthy. “But it doesn’t translate to the home, so the way we mike the stadium is important.”

And even embedding the announcers in the stands is proving to be a winner. At a Screaming Eagles game in Washington, DC, this season, announcers Rob Stone and Alexi Lalas were located in the fans section.

“We did pregame, halftime, and postgame reports from the supporters’ section,” explained Kenworthy. “The fans even voted on whether we could be there because they didn’t want to be seen as pawns. But we were respectful of their fan culture.”