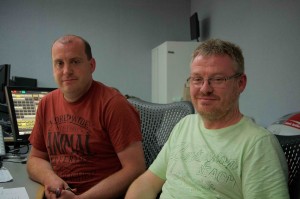 As the British and Irish Lions achieved an unpredicted success in the Second Test against the All Blacks in New Zealand, one unexpected technology was proving a similar success in Sky Sports’ remote production of the tour. The broadcaster has been using four Mobile Viewpoint Agile 2.0R units in New Zealand using SIM cards and internet connections to provide content from the tour, including redundancy.

“The quality and latency of these was so good that were also pushed into service to bring back additional switched ISO feeds, further complimenting the remote production,” said Sky Sports’ Technical Manager, Gordon Roxburgh.

“The Mobile Viewpoint units have been very useful and robust, and we’ve used them both in the SIM card configuration and across Ethernet, and in both they’ve worked very well, whether at the venues [in the OB truck] or out and about,” as camera backpacks, explained Sky Sports’ Production Manager, George Griffiths.

“In some remote parts of New Zealand, the 4G connections have been challenging and, in general, they’ve worked very well,” he added.

The units can be used live, or for recorded pictures. The delay is adjustable, “so if you’re not doing something live on them you can adjust the delay up to 60 seconds; if you are in a remote location you can allow the 4G to buffer.”

“For live the optimal delay is 1.8 seconds, which has been achieved regularly on the project. We don’t tend to use them for a reverse feed. It is really a transmission tool,” he said.

For redundancy, Sky also had a 9Mhz SNG uplink, delivering the match feed to Sydney, where it went via leased fibre to London. A presentation camera could also be included in that.

Technical Manager Ian Brash usually looks after Sky Sports News, where, for the last five years, it has been slowly replacing its SNG trucks with bonded cellular equipment, mainly from Mobile Viewpoint.

Two of the units are being used for ENG and two in the OB trucks as backup circuits, because “if someone in a digger puts through the cable, we still have two circuits coming back” via the local SIM cards. The 1.8 seconds delay Sky uses means the unit has the opportunity to re-send any packets that are dropped. “If you are in a low signal area, you increase they delay to improve your picture quality,” said Brash.

In fact, “the circuits coming back to London via Mobile Viewpoint are a couple of frames earlier that the circuits via fibre,” he said.

Sky also had a Fan Cam from three pubs (in Cardiff, Dublin and Edinburgh) as well as from an outdoor screening at Saracens’ Allianz Park in London, to show the fans’ jubilation as the Lions scored their two tries.

During the first Test match they used Skype, “and it was very poor quality”, so for the second test they used Mobile Viewpoint’s iOS app for the three pubs, as it can use both WiFi and cellular data (bonded) whereas most apps on the iPhone use one or the other. “We’re broadcasting, we don’t care about data use. We want the best possible pictures,” he said. However, while the pictures from Dublin and Cardiff looked good, there obviously wasn’t enough bandwidth available for reasonable motion. The barman in Edinburgh seemed to have had a problem setting up the system — or maybe forgot. Fortunately, a Sky Sports News cameraman with a Mobile Viewpoint backpack had been sent to Allianz Park, so they were able to cut to the cheering there for reaction shots after the two Lions’ tries, and the All Blacks’ red card.

In the pubs, they had the bar manager put the phones as close to the screen as possible. “We don’t want a shot of the back of people’s heads watching the screen.”

Although the Mobile Viewpoint units in the OB truck could achieve 20Mbps, one was being run at 9Mbps, while the other was at 6Mbps — both looked very good, with blades of grass easily distinguishable on the 9Mbps shot.

“For ENG we normally run the backpack at 5Mbps on SIMs, although the units can do up to 15Mbps if that is available,” explained Brash. “That’s very usable. It’s HD quality for the purposes of sports news. Of course, it doesn’t look like 40Mbps, but it’s not like using Skype. There are no compromises being made. It is full broadcast quality.”

The 9Mbps signal was the primary backup (as the OB truck could access all of the cameras) while the 6Mbps circuit was used for the wide beauty shot of the stadium.

Brash could take remote control of any of the units and change settings from London, necessary as the primary user of these units is a cameraman rather than a technician. The unit can take up to eight SIMs, which they typically try to share across all available networks. “If you’ve got a mixture of networks and one takes a hit, the others can take up the slack,” he said.

One of the attractions of the Mobile Viewpoint system is that they only use the bandwidth they need when they need it, so they don’t transmit black for an hour if the cameraman leaves the unit on. “We’re very pleased with the efficient use of data we get from them,” said Brash.

Sky Sports now has 20 backpacks, but just 14 receivers: “we never have all 20 switched on at the same time and each ties up lines from the MCR to the gallery.”

When Sky was testing all the different bonded cellular brands it found that the systems from Mobile Viewpoint and Dejero were the most consistent. “We found that they were the most capable of taking little hits to their bandwidth, so they gave continual pictures under more difficult conditions.” It also has three Dejero transmitters with four receivers.

One of the Dejero transmitters is based in the US, where previously they would do day hire of an SNG truck. “For the same cost of day hire, you can hire a Dejero for a week, including air time, whereas the SNG also has uplink costs. But, last year we spent £30,000 hiring Dejero units in the US, which is why we bought one.”

Sky Deutschland also has about five Mobile Viewpoint units, and is using one of Sky UK’s units at Wimbledon this week (where Sky Deutschland is a rights holder). Sky Italia is also in the process of buying some too.

“They’ve revolutionised what we do in the UK. One of our goals is to take in all Premier League news conferences,” which often used to involve a cameraman having to drive somewhere to upload the content. “Now the cameraman takes the Mobile Viewpoint backpack and all of the news conferences come in live,” said Brash.