Monte Carlo Rally 2017 heralds a new era for the sport 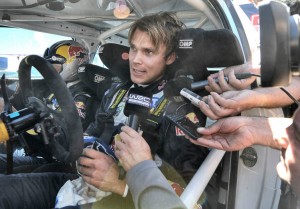 2017 promises to me an exciting year for fans of the World Rally Championship (WRC). There will be new, increasingly spectacular cars as well as additional programming content to ensure that the fans do not to miss out on any of the action. Accordingly, the WRC promoter has made a major effort to provide the best media coverage possible.

The showpiece series intends to attract a larger audience with four manufacturers competing for the championship with enhanced performance and rebuilt cars. This calls for the best possible media coverage not only on television but also – and possibly most importantly – online.

Including the recent Monte Carlo Rally, the 2017 edition of the WRC will provide more broadcasting content than ever before. Last year more than 12,000 hours were aired worldwide for an estimated global audience of more than 700 million people (WRC source). This season another two timed events will be broadcast live the first two days of the rally, in addition to the live broadcast of the final stage, called the Power Stage. The well-established programme covering all the stages of the WRC will contain new features. “Broadcast on Sundays at midday, it will change from a 60- to a 90-minute programme format and will contain more interviews, more in-depth coverage of the podium ceremony, and live feedback from the service park. [A total of] 65 free or pay TV channels will broadcast the entire season in more than 155 countries,” explained Mark Wilford, communications manager for WRC Promoter.

Besides the live broadcasts, distributors can also count on an introductory presentation before the Rally, 26-minute daily highlights packages, and a 52-minute summary after the race.

A dedicated WRC TV team produces these programmes using Sony FS 7 cameras.  Official sponsor Lexar supplies the memory cards for the video recordings. “In addition to the helicopters and onboard cameras, we use DJI drones as well. The manufacturer is also one of our partners. Once the footage has been shot, the rushes are sent by motorcycle couriers or helicopters directly to the rally’s TV compound. After editing is completed they are transmitted by satellite to the broadcasters. Florian Ruth heads our production teams, while Kevin Piper deals with editorial content,” added Wilford.

Traditionally this is a Finnish sport so it is not surprising to see the Finnish subsidiary of NEP Productions (previously called Filmworks) at work for the live productions. One of its OB vans is parked close to the relevant special stage. Marko Vitanen is at the helm of the live production.

“We use mainly RF uplinks and downlinks. Video footage from the onboard cameras is sent to a pressurised aircraft (the B200 of Worldlinx Alliance), which then sends it to the OB van,” added the communications manager.

The company which handles the tracking system on behalf of the FIA is Sit Sports.

The WRC is available across all social media platforms in order to fulfil fan expectations in the best possible way. Content or any other relevant information is updated on dedicated YouTube, Facebook, Twitter and Instagram pages. Following on the example of the WEC (the World Endurance Championship), the promoter has launched a specific application with paying options since last season. The WRC+ app has evolved this year and offers subscribers numerous services that are accessible throughout the season such as geo-tracking, access to all live and recorded programmes, as well as onboard action for 4,99 euros per month or 49,99 euros annually.