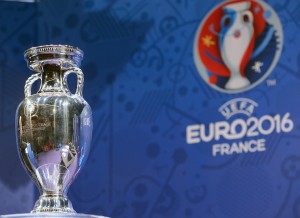 Paris, France, March 2: The trophy pictured during a press conference on the occasion of 100 days before UEFA EURO 2016 at Maison de la Radio on March 2, 2016 in Paris, France. (Photo by Frederic Stevens/Getty Images)

Fan interaction technology specialist Monterosa has been appointed by Carlsberg to create interactive digital experiences for UEFA EURO 2016. Ahead of the start of the UEFA European Football Championships, official partner Carlsberg has announced that it will be using Monterosa’s fan engagement platform LViS to power voting and fan interaction for this year’s Man of the Match and Goal of the Round/Tournament experiences.

Carlsberg has been one of the EURO official sponsors since 1988. This year, as a strategic part of its commitment to “do it better for the fans”, the Danish brewing giant has turned to Monterosa to deliver a real-time interactive consumer experience across Facebook, Twitter, UEFA.com, the UEFA app and Carlsberg’s own football hub. In a first for a global sporting event, fans will be able to interact with the Man of the Match and Goal of the Tournament experiences on the platforms and devices that are most relevant to them. Monterosa’s fan engagement platform LViS will be used to power the live voting and fan interaction.

Richard Whitty, senior marketing manager, football, Carlsberg Group, said: “Heading into our eighth consecutive UEFA European Football Championships we are constantly challenging ourselves and our partners to bring the best possible experience to our fans across Europe and around the world. Monterosa’s unique combination of technology, solutions and innovation allows us to let the fans really be a part of making key decisions during the EURO, and we can’t wait to see them getting involved.”

Martin Majlund, head of global marketing yechnology, Carlsberg Group, commented: “Monterosa’s LViS platform provides us with an enterprise-grade solution that will allow millions of fans around the world to interact with the EUROs on the channel of their choice. For the first time they can engage through our website, the UEFA app or on social channels, we’ll be able to aggregate their votes and hopefully create the biggest ever sporting interaction.”

Ben Barker, director of sport, Monterosa, said: “Carlsberg’s desire for technology innovation is at the heart of its approach to fan experiences, and a key factor in our new relationship with them. Since the 2012 tournament, how fans engage and interact with football has fundamentally changed, and through our work with Carlsberg we’ll ensure that fans have a clear voice and are at the centre of the action.”