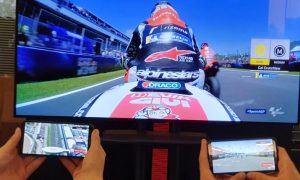 Fans of MotoGP within Austria now have access to a second screen app from NativeWaves that allows viewers to select multiple camera views on their mobile devices, perfectly synchronised across multiple screens.

Tested over the weekend of 11 August at the MotoGP Austria Grand Prix in Spielberg, NativeWaves delivered the technology for the 2019 MotoGP World Championship on the MotoGP Second Screen App to viewers in Austria.

With this new technology, viewers can use their mobile devices to choose their preferred perspective, synced with their TV screens. NativeWaves will now continue to develop the technology for the app, which will continue to be made available to fans in Austria.

Speaking to SVG Europe, Marcel Hasenrader, CEO of NativeWaves, commented on the result of the pilot: “The pilot test at the Austrian Grand Prix was a tremendous success and we have received overwhelmingly positive feedback from our broadcast partners and viewers. 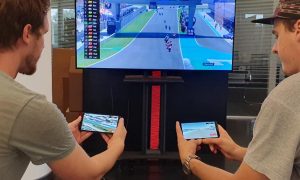 NativeWaves tested the new app on six synced broadcast streams, available across multiple devices for each of the Q2 qualifiers and the main races of the Moto2, Moto 3 and Moto GP at the Austrian Grand Prix

“We delivered six synced broadcast streams, available across multiple devices for each of the Q2 qualifiers and the main races themselves of the Moto2, Moto 3 and Moto GP at the weekend. As we head into the rest of the Moto GP season, additional features will be added and the app will be optimised further to take the user experience to the next level,” Hasenrader stated.

He went on: “We are thrilled about this collaboration that transforms the way that broadcasters can deliver live sports. Broadcasters will be able to engage viewers by offering additional content seamlessly across multiple devices, while viewer behaviour analytics enable them to enhance and tailor the user experience, creating potential for new revenue streams.”

NativeWaves hopes to roll out this feature out to broadcasters in other regions who have the rights for MotoGP, but it is up to the broadcasters if and when they want to adopt it.

NativeWaves’ technology for broadcast provides a seamless and synchronised experience across multiple screens, enabling viewers to watch additional content without the limitations of TV where only one camera angle is broadcast at any time. Efficient and versatile, it delivers ultra-low latency streams which are faster than TV, while optimising bit-rates and quality. NativeWaves’ technology integrates easily into existing broadcast processes while maintaining the integrity of the original content.