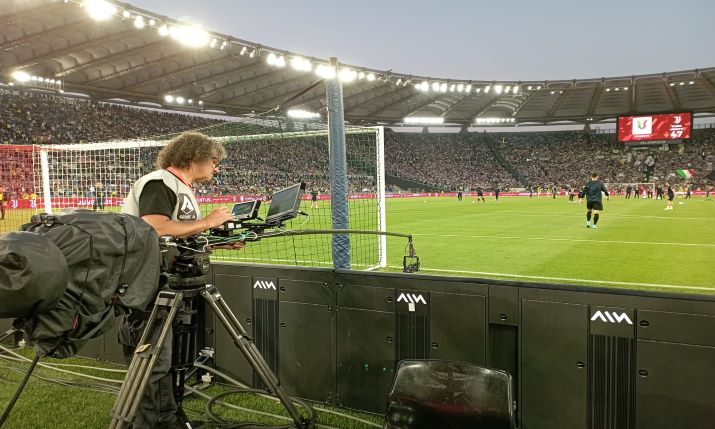 Movicom provided two Polecam systems for the 2022 Coppa Italia, which were used during the match as ‘in-net’ goal cameras and then quickly repositioned to cover the awards ceremony at the end of the event as quick-moving jibs

In association with NEP, Movicom Italy supplied the 2022 Juventus versus Inter match with specialty cameras, including the Robycam, Polecam and Frecciarossa cam.

The Coppa Italia is a 100 year old annual event that pits the best of Italy’s football teams in a knock-out competition that culminates in a much loved, much debated and much watched final game. This year on 11 May the final match featured teams coming from the two largest cities in northern Italy – Milan’s Inter and Turin’s Juventus. These teams have faced each other only two other times previously, with Juventus winning both previous games. This time around it was Inter’s turn, winning four goals to two.

The big game was held at Rome’s largest sports venue, Stadio Olimpico, with seating for over 70,000 spectators. Movicom together with NEP Italy were tasked with providing specialty camera systems for the broadcast coverage. The broadcast went out to over 170 countries internationally presented by over 30 foreign broadcast companies. 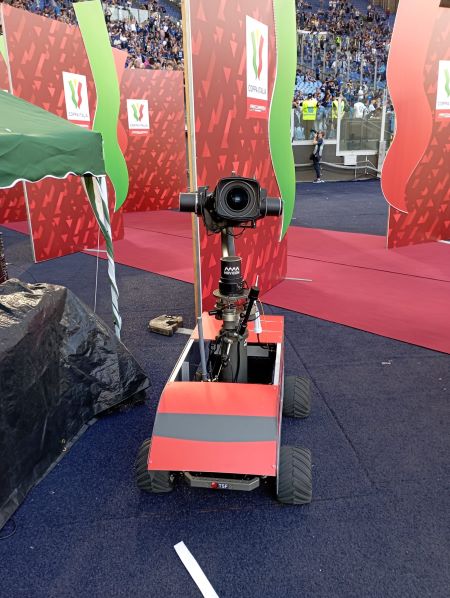 Frecciarossa buggycam is Movicom’s R3 gyro-stabilised head mounted on Motion Impossible’s Agito, a remote-controlled camera buggy. It is called the Frecciarossa cam because it has been dressed in the colors and logo of Italy’s primary train company Trenitalia, one of the sponsors of the Coppa Italia 2022

Movicom Italy’s Robycam 3D cable suspended camera system provided live overhead coverage during the broadcast as well as replays when needed. The four-point system has a low drop angle and is therefore out of the way of the broadcast’s main cameras.

In addition to the overhead footage provided by Robycam, Movicom provided two Polecam systems which were used during the match as ‘in-net’ goal cameras and then quickly repositioned to cover the awards ceremony at the end of the event as quick-moving jibs. The small footprint and light weight of the Polecam systems makes it ideal for repositioning quickly and unobtrusively.

Movicom Italy’s coverage didn’t end there, with the Frecciarossa cam roamed the field and covered the action before and after the game, using the Olympic stadium’s running track to get great angels of the fans. This buggycam is Movicom’s R3 gyro-stabilized head mounted on Motion Impossible’s Agito, a remote-controlled camera buggy. It is called the Frecciarossa cam because it has been dressed in the colors and logo of Italy’s primary train company Trenitalia, one of the sponsors of the Coppa Italia 2022.

The roving camera system has appeared at Italian supercup Lega Serie A games and has become a fan favorite, much like a mascot. The Frecciarossa cam covers the action from the field, getting close ups and angles that are otherwise almost impossible to get.

In addition to all of the above Movicom provided a Robyhead D1 remote controlled head which was used to present augmented reality (AR) graphics during the game and at the closing ceremony for the Cine Pack of Lega Serie A provided by NVP.

“One nice advantage for us is that we have a great team of technicians who can set up several systems at the same location to maximise the staff and the coverage,” said Simone de Lella, COO at Movicom Italy. “This was an outstanding opportunity to display a good range of our systems at the same event,” he continued, “We’re very grateful to our partners at NEP Italy for helping to make this possible.”

Sergio Cecchini, managing director at NEP Italy, added: “We and our broadcast partners were very happy with Movicom Italy’s contribution to the game coverage. There were a total of 24 cameras for the host broadcast and the specialty cameras were a crucial part of the match, used often for replays as well as live shots.”

Movicom’s team for the Coppa Italia 2022