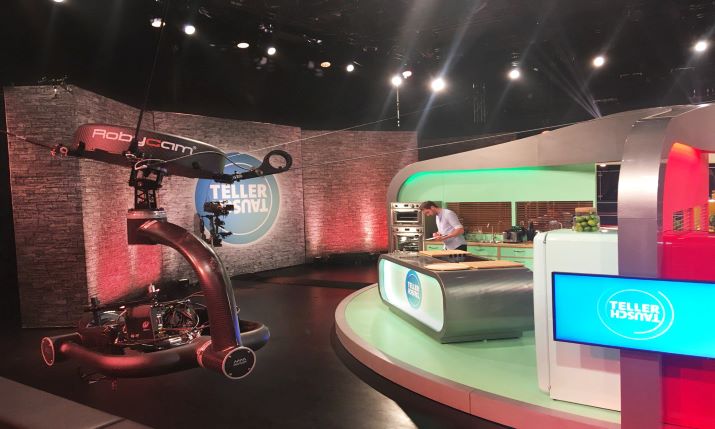 By Victor Pakhomov, CEO of Movicom

This NAB we would have been focusing on multiple developments. First, the extension of our Robycam cable-suspended camera family of products, with the launch of the new Robycam Studio; a suspended cable camera system designed to bring the production value and camera angles of a cable camera to the small studio world.

Designed specifically for small area operations with a tight footprint and quick rigging time, the Robycam Studio system is perfect for any studio infrastructure. Its software allows easy integration into the automation system.

As with other products in the family, Robycam Studio allows the recording and reproduction of flight paths and patterns for the company’s cable cameras. Integrated driftless positional data with our Compass Augmented Reality (AR) Tracking technology allows seamless integration with all major AR graphics and virtual studio vendors. Not only can a show maximise a virtual studio’s production value, but also record, and playback preset moves, and set safe areas.

Just before the New Year, we released and successfully tested a new point-to-point system, the RobyLine.  This is a classic point-to-point system, built around our modern R3 head has already worked at IBU and FIS Alpine skiing World Cups. The system can cover more than 1000 metres and can have rigging points that vary from 10 metres to 20 metres using only one intelligent winch.

With fast acceleration, the system can achieve speeds around 16ms which makes it perfect for dynamic sports, like races or extreme sports. The new system is much quicker and easier to rig.

This year we also have two important innovations released in partnership with Vislink. The first, dubbed ‘Earcam’, consists of an Atom Mini Air camera mounted on a simple comfortable headband, with the transmitter and battery pack embedded in a belt pack.

The system can be employed by officials in sports that may not require head safety equipment like soccer, field hockey, American football, rugby as well as many other sports, including indoor sports like basketball and boxing.

Along with the Earcam, we have developed an ‘UmpireCam’ specifically for baseball umpires. Designed to be attached on top of any type of umpire mask with a quick-detach mount, the camera is designed not to interfere with the umpire’s line of sight, and also to break away if hit by a ball without compromising the official’s safety.

The all-in-one all steel unit attaches to any existing umpire mask and because of its featherweight it is virtually unnoticeable to the person wearing it. The main goal here was to get as close to the action, to capturing the athlete’s emotions in close up, as possible, almost from their point of view. This pushes the shot options available to directors across the sports gamut, enhancing their ability to tell the game and the athlete’s story.