TV shooting in the entertainment and sports areas has closed in on itself in recent years, producing, in practice, a certain concentration of forces in the hands of a few highly specialised production companies in Italy.

In addition to contracting in number, the production service providers who physically carry out the filming of sporting events from venues in these months of widespread pandemic and due to the cancellation of live matches have suffered greatly, while preparing themselves as best possible for the much anticipated ‘re-start’.

Everyone has invested this time of immobility triggering technical updates, focusing on staff training in the IP domain and adopting interpersonal distance and minimum hygienic safeguards such as masks, gloves, gels disinfectants and repeated temperature controls.

In addition, everyone — certainly in full cooperation with producers, sports rights holders and broadcasters — has tried to ‘create a network’ and implement adequate plans to adapt to the safety regulations imposed by the COVID-19 pandemic.

However, each has also implemented unilateral resolutions in order to begin planning a ‘new future’ or ‘next future’, aware that the imperative is first and foremost a greater attention to safety and the protection of everyone’s health and that sport — especially football — is the global economic driving force that can no longer stand still.

SVG Europe asked some companies specialised in television services, throughout Italy — namely Cinevideo of Pescara, Abruzzo, Opera BVS of Foggia in Puglia, Videe spa, of Pordenone, Friuli and Global Production Srl of Turin, Piedmont — to take stock of the situation. In this first part we get the opinions of Cinevideo and L’Opera Broadcast Video Service Broadcasting.

“By working on Serie A with two fixed pitches, namely Parma and Ferrara with Spal, we cover the production of these events with our flagship mobile vehicle Dolphin 7.0,” said Andrea Buonomo, Cinevideo executive sales manager.

“In addition, on Serie A we usually provide all Hypermotion services up to 2000 fps, even for the highest match standards. The last match was on 8 March with Juve-Inter in Turin, where we provided two Hypermotion systems. 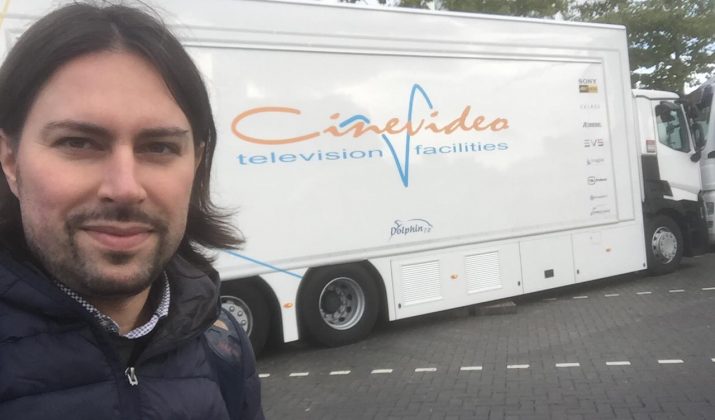 “Then we stopped for the suspension of the championship and without live events we suffered a lot, but so far we have managed to guarantee a minimum coverage for RAI locally on the news in Abruzzo, Marche and Molise areas, with ENG crews, backpacks and streaming systems,” said Buonomo.

“Like everyone else, we are on high alert waiting for the official announcement of the re-launch of football, but news about it is still missing. At the moment the individual training has started and then it will be the turn of team training.

“Together with two of the major national broadcasters and the largest holder of Italian sports rights we have considered that the Dolphin, which on board allows 35 zones in normal operation, in this emergency situation — and trying to maximise the space between operators — it is able to house 19 operating zones, also installing plexiglass barriers, as additional safety for staff.

“In practice, being an ISO9001 certified company we have done nothing but increase the frequency of the usual maintenance operations to which we add the sanitisation of the air conditioning filters before and after each event,” he said.

“Some laser thermometers will already be in operation at the entrance of the stadiums, but we will perform a double check alongside the official ones. In the typical configuration B or C, required for the standard shooting of some matches in Serie A, in addition to the staff of the Lega Calcio (production manager, director and assistant director), within our host OB van we will supply a video mixer operator, five RVM technicians, a sound engineer, three camera controls and a technical manager. The number of cameras engaged will be 11 or 12 plus a Steadicam (one Supermotion in standard B and two in standard C).

“In conditions of normal operation, integration with the unilateral personalised feed is usually carried out within the same mobile van, while at this time of post Coronavirus recovery, another separate mobile vehicle will be used for this purpose, which houses five to six people,” said Buonomo.

“Live events were stopped but we certainly are not,” said Michele Infante, CEO, owner and founding partner with seven other professionals of Opera Broadcast Services. “We stopped on 15 March, the date on which we shot the last match behind closed doors in Florence.

“Since that date the Government helped us with employees salaries and there have been no engagement requests: in practice, all events were cancelled and not postponed.”

L’Opera is still on standby ready to resume with football shooting as soon as possible and with motor sports in early July, determined to reduce losses. This silent period has seen them busy preparing a multi-handed operational protocol together with the occupational doctor and safety engineer.

Infante continued: “We have launched a control committee that will enforce the application of strict preventive measures and, shortly, this protocol will be distributed to customers to reassure them of a safe restart. The biggest problem is — obviously — the safety distance between people, which is certainly not optimal in mobile control rooms.

“The broadcasters are also studying protocols that will be shared; for example, someone has

hinted about a tent dedicated to everyone’s temperature control. There will no longer be permanent badge passes, but temperature control is essential for every access. Everyone is inventing different criteria that will be considered and it is desirable that these new protocols be shared as soon as possible.

“Safety measures on board require the appointment of a responsible inspector who will block unauthorised entry to the gallery and will verify everybody’s compliance with the PPE envisaged,” said Infante.

“The most original idea of this period – in my opinion — is a production model reduction: instead of using 15 cameras as standard, we can produce every sports event with five cameras, so that the reduced staff can maintain a proper safety zone on board, as well as a mask and gloves and the rest. Up to seven areas could be available and all staff are protected.

“The last game we filmed was played in an empty stadium, without an audience, and in my opinion the television performance was rather poor, as if 50% of the media product was missing. In the past, we filmed football for RAI using three cameras and the result was still excellent. It is therefore a matter of creating the right production model, modulated on an intelligent compromise between safety and spectacle.

“Where it will be imperative to work with more than five cameras we will adopt plexiglass panels in mobile vehicles to counter the absence of the minimum distance, for example between RVM and camera controls.

“Furthermore, on all our vehicles, we have opted for the adoption of ionisers, the same ones used to fight the virus in hospital intensive care areas. There will also be a new inspector with a temperature scanner and a closely controlled single entrance will be enforced.

“We will also have to make use of single rooms in the hotel for the whole crew and another novelty that will affect the cost is, that to comply with the protocol, all travel by car (even from the venue to the hotel) cannot involve more than two people per car. Thus the production of a week’s sports events will generate a financial outlay that we will have to face,” said Infante.