Eurosport has reported a significant rise in digital viewership for Roland Garros, following the global direct-to-consumer (D2C) strategy of its parent Discovery. Eurosport saw a 31% year-on-year increase in unique views of the Roland Garros 2019 tournament via its dedicated over-the-top (OTT) video streaming service, Eurosport Player, and the Eurosport app.

The average viewing time via the Eurosport Player also witnessed a big boost with users watching for 45% longer than last year. Eurosport.com – including both website and app – experienced 25% more unique visitors compared to the 2018 event. 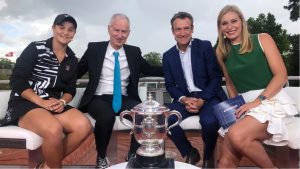 Ash Barty, the women’s champion at Roland Garros this year, appears on Game, Schett & Mats after the final. Copyright: Eurosport

Eurosport’s coverage of the tournament on all platforms, including every minute live and over 600 matches and 250 hours of coverage in more than 50 countries, was driven by a focus on powering people’s passions for tennis through enhanced digital content, stories told through the best line up of experts and localised production.

Eurosport 2 saw 15% growth in average live audience overall, with the local Eurosport 2 channels in the Netherlands (+213%), Poland (+26%) and Spain (+97%) – including the best-ever audience for the men’s final in the country — experiencing significant year-on-year increases compared to 2018.

There was a similar trend on Eurosport 1 with double-digit growth in France (+21%), the UK (+17%) and Norway (+50%) – where the two finals delivered the highest ever ratings for tennis matches in the territory.

Commenting on the results, Dave Schafer, SVP sports content, operations & planning, said: “It’s great to see that tennis fans across the continent are engaging so passionately with our content and coverage and the results are clear evidence that our increased consumer focus is paying off. Our multi-screen content strategy is driving video and streaming growth but our short-formats are also translating to TV and entertaining traditional audiences.”

“Year-on-year growth in key markets, on both digital and linear, underlines that Discovery and Eurosport is committed to engaging and growing audiences on all platform and all screens. Discovery and Eurosport combined have the unique ability to optimise distribution and live sports coverage across all platforms – free-to-air, pay, OTT and digital – and can deliver the biggest and most engaged audiences.”

Forgotten stepchild: Telos Alliance questions whether audio is getting left behind again in the cloud production raceWyplay and Sceenic   deliver co-watching solutions for TV operators­­­­­­Lessons to learn: Arkona Technologies talks IP, the cloud and the importance of adopting open standardsTaking out the guesswork: Synamedia on how streaming piracy is putting sports to the testBeing bold: Mobile Viewpoint on growing content production opportunities through remote production over public internetRethink and reconfigure: Telstra on why flexibility is the key to a successful futureSports Graphics Spotlight 2022: Registration opens for 23 February online eventTimeline appoints Aoife Murphy as new head of operations for expanding outside broadcast divisionISE announces three month postponement to 10 to 13 May 2022EMG Group promotes Bruno Gallais to MD of EMG France to oversee restructureTIM delivers enhanced quality of experience with Broadpeak’s multicast ABR solutionDirect to consumer: Red Bee on the buzz around aligning business goals with consumer desires
Read more