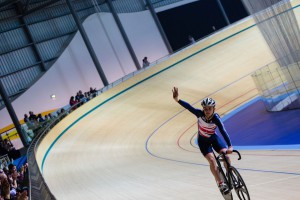 Two years on from laying the foundation stone, Derby Arena was officially opened to the public on 20 March complete with a sizeable d&b audiotechnik T-Series sound system supplied by Orbital Sound.

The new venue incorporates a 250m indoor cycle track – only the fifth of its kind to open in the UK – as well as the ability to stage large cultural events, exhibitions, product launches and conferences, with a seated capacity of up to 3500 and up to 5000 capacity seated and standing.

In its capacity as an event venue it comes under the responsibility of Derby LIVE, the Council’s entertainment arm, which is responsible for managing all of the venues and outdoor events. Headed up by production and technical manager Gareth Chell, Derby LIVE was given the task of identifying and installing a new sound system for the venue.

“Our aim was to specify a high quality system that would be able to take large scale events in its stride, as well as providing an excellent back-up for incoming tours, who generally bring in their own PA rig,” said Chell. “With such a prestigious brand new venue, we wanted to go for a recognised brand that would inspire confidence for visiting engineers, as well as delivering a great sound in the arena space. We’ve been using d&b audiotechnik systems for some time, installed in the old Derby Playhouse and in the Assembly Rooms, which had performed extremely well and reliably ove r a number of years. For the Derby Arena we felt that the T-Series would be an ideal fit, giving us great audio delivery out of a lightweight and very compact system. Orbital Sound was awarded the contract, extending our existing relationship with the team who have given us excellent support for more than four years.”

The wide Arena space utilises the T-Series configured in four hangs of eight cabinets each. Two are deployed to cover the inner arena, and two for the outer sides, complemented by B4 Subs across the front of the stage. In addition, the system includes a ground-stacked Q-Series system, with two Q-10s and three Q-Subs each side, to provide full coverage for the arena.

“The d&b amplifiers really do look after the speakers for you, ensuring that the system is protected no matter what is thrown at it – particularly relevant when you have a lot of visiting acts!” said Chell. “ArrayCalc is a fantastic tool for setting up the system, and we are really impressed at the sound quality we are getting out of such a comparatively small system. It is easy to rig and move around, which is important for us, and delivers an impressive punch and quality.”