Legendary German goal player Oliver Kahn is looking to transform the nature of goalkeeping beginning with changing the name of the position from a keeper to a player as today’s goalie is a major part of not only stopping shots from getting into a goal but also starting the offensive effort with a kick or pass of a saved ball. But his efforts also include a line of equipment as well as video tutorials via Goalplay and MX1 services provider is helping out in the delivery of the content. 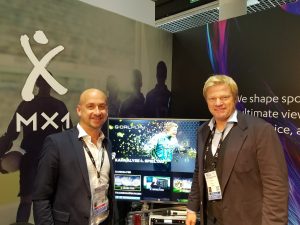 Dr. Robert Niemann, Olver Kahn Titan, head of sales, says that MX1 will help Goalplay produce up to 150 videos in the next 12 months.

“It’s a one-stop partner that can handle the content all along the value chain,” he says. “MX1 will help deliver content to the Goalplay Web site and Samsung TV and mobile apps as well as social media. Each of those require content to be prepared beforehand and that is what MX1 and SES are delivering to us.”

Sebastian Ströhl, SES, key account manager, DACH, says that MX1 is looking to not only handle contribution of content around the globe but also archiving and management before the content is delivered to a CDN or other customer-facing app or service.

“It’s an easy step for us as when Goalplay changes their target group [for content] we can manage those things,” says Ströhl.

. “The raw material is put into our system and then archived and the content is edited. It then goes out to different outlets. “Dealing with and handling content and content management is nothing new for us.”

Dr. Niemann says that MX1 will ensure the Goalplay content is protected and that it only ends up where Kahn wants it to go. For example, Goalplay is available via an app on Samsung TV sets.

“The rights are covered by geoblocking and MX1 can guarantee that will happen and that it will be delivered in the right language and resolution.”