NAB Reflections: Audio keeps up with a healthy broadcast industry

According to supplied figures, attendance at NAB 2017 topped the previous year’s numbers, suggesting a robust broadcast industry. Based on the changes under way in broadcast audio, it’s also an interesting and sometimes intimidating one.

The shift toward IP-based signal transport, which was pervasive at the show, seemed as rapid as it has been unsettling for many, reminding some business veterans of the tectonic shift from analogue to digital over a decade ago, only on a more rapid timeline. The DTV Audio Group meeting on Sunday ahead of the show’s opening revealed how robust and sophisticated the audio-over-IP (AoIP) infrastructure has become. Presentations by an array of engineering experts explained how key functions — device discovery, documentation, security, testing — have already been integrated into working IP audio networks.

“The SMPTE 2110 group wants to make the process simple and foolproof,” said one presenter at the meeting, referring to the coming generation of AoIP protocols being hashed out by that standards organisation and the Alliance for IP Media Solution (AIMS), a consortium of 40-plus manufacturers and vendors, and the Media Networking Alliance (MNA), which is promoting the AES67 interoperability standard.

In fact, a number of interoperability demos at the show indicated how much progress has been made: Artel Video Systems and Black Box, for example, demonstrated IP interoperability and full KVM access for remote production. A number of the companies involved in developing the viability of AoIP in broadcast — Audio-Technica, Bosch/RTS, Calrec, Focusrite, Genelec, Harman, Lawo, Shure, Solid State Logic, the Telos Alliance (via the Telos Alliance TV Solutions Group), Riedel Communications, Wheatstone, and Yamaha — took part in demos on the show floor. 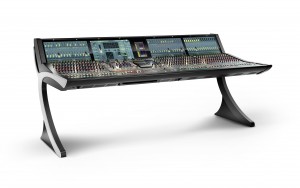 The product side of NAB 2017 also reflected the considerable pace and progress of AoIP-enabled systems. Lawo’s huge and impressive mc²96 Grand audio console is specifically designed for IP production environments through native support for all relevant standards, including SMPTE 2110, AES67, RAVENNA, and Dante. Wheatstone exhibited its new PR&E DMX console system with console surface and IP audio networking. SSL, DiGiCo, and Calrec were on hand with new consoles and console-related developments.

With the FCC 600 MHz auction completed on the eve of the show, there were plenty of new wireless-audio systems to be seen and heard. Audio-Technica’s 6000 Series high-density wireless system is a spectrum-efficient solution that allows users to pack 31 channels in 4 MHz of bandwidth, with channels spaced at 125-kHz intervals and able to be used simultaneously. Shure’s Axient Digital Wireless System builds on the company’s UHF-R, ULX-D, and Axient wireless systems and provides real-time control of all transmitter parameters with interference detection and avoidance. 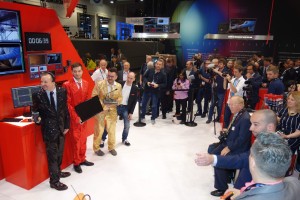 In the object-based audio domain, Dolby continues to promote Atmos as a broadcast-sports audio format; the system has been used for two recent boxing broadcasts in addition to English Premier League games in the UK. Meanwhile, Fraunhofer’s MPEG-H continues to prep for the 2018 Winter Olympics in PyeongChang, South Korea — the first Games to use the multichannel audio format. And Belgium-based Auro demonstrated its Auro-Cx audio codec developed for streaming markets, using televised soccer footage to underscore its broadcast-sports applications.

Between definitively planting the AoIP flag, a radically altered RF landscape, progress with new immersive multichannel audio formats, and a peek into the VR/AR future, NAB 2017 reinforces the fact that broadcast audio continues to unceasingly reinvent itself. There’ll be a lot to learn before NAB 2018.