Sony Professional Solutions Europe recently upgraded its sponsorship of SVG Europe to Platinum, in order to cement its commitment to the sports broadcasting industry. The move follows the inauguration of a dedicated sports innovation division, and at the SVG Chairman’s Forum at Red Rock Casino on the eve of NAB we sat down with David McIntosh, senior vice president Sony Sports Innovations and Adam Fry, vice president Professional Solutions Europe to learn more about key changes in the European sports arena.

David McIntosh: “You’re aware that, together with HBS we were heavily involved in producing coverage of the World Cup. You’re aware we own Hawkeye and Pulselive. We have pooled all of those businesses together into a new division called Sony Sports Innovations, focused on the sports production market worldwide. That’s the significant step we’ve taken.

“We want to look at how we bring that story better to your [SVG] audience. If we took a poll here at the show perhaps most people would say ‘cameras and monitors’. I’m not sure most people would understand the depth and breadth of what we do, from production services to virtual production, VR and cloud-based solutions.”

Adam Fry: “Sony Sports Innovations was set up around 18 months ago. Everyone knows our media production business and we’re all comfortable with that. In 2011 we acquired Hawkeye, and there’s a sister company there as well called Pulselive which works on managing digital assets and platforms for sports federations like the EPL. 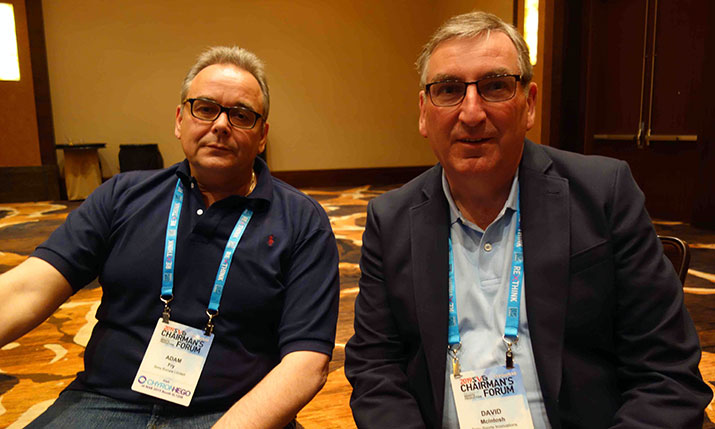 “Then in 2015, we realised the markets were starting to converge and also that the industry around sports media production is starting to change and mould itself differently. We looked at our own strategy again and realised we had a number of assets in the officiating side of sports – which is changing the way sport is played, engaged with and viewed – and then on online and digital with big changes in the Pulselive area as well.

“We felt we should pull all those assets together and manage where we think the industry is going to go, and also how we think the differences in some of the commercial models may play out in the sports markets – such as content owners looking at different models for monetisation of their media.

“There needed to be a recognition that Sony is really at the forefront of sport, with these different vehicles: sports production [through existing Sony Professional product lines]; the officiating side; and digital platforms. Everyone is looking at different ways of viewing and enjoying the technology, fan engagement, fan analytics and data as well. And of course, Pulselive is a services model, not a product sales model. We do all of those aspects.”

David McIntosh: “Of course, use of the cloud and taking broadcasting into the cloud is actually a big part of the whole offering. Sony Sports Innovations is a services-based business, not a hardware-based business. The breadth that we bring is something that we’re very keen to let people know a little more about.”

Adam Fry: “Our headquarters is in the UK. Worldwide now we’re about 550 people. On the ground we’re delivering VAR services to all the major football clubs. We have offices in Australia and India, where Pulselive are working with the IPL. Sony Sports Innovations is a truly global organisation, in its structure and management.”