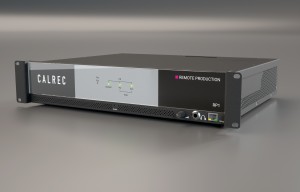 The RP1 unit is set to provide a major boost for remote audio production of broadcast events worldwide.

The Calrec stand at this year’s NAB Show hosted an insightful demo of a remote production configuration based around its RP1 Remote Production solution and Apollo console, with audio transportation enabled by the AES67 AoIP interoperability standard.

Gesturing towards a sports venue as represented by a football table, Calrec communications manager Ian Cookson said that “what you have essentially got here is a stadium and over there is our studio, and between them is a distance of hundreds of miles. We have set up some microphones around the table, which are fed into our FieldBox then straight into our H2Hub, which is a router expander for the RP1. The RP1 is the router connection and the AoIP unit also goes into there.”

Audio is routed from the mics into the AoIP unit, which “then goes over hundreds of miles to another AoIP unit and then into the Apollo desk via AES67. It comes back into [Calrec interface] Hydra2 ‘land’ and can be mixed in the studio. So what you have here is basically a representation of remote production.”

Debuted in 2016, the RP1 makes it possible to minimise the use of on-site resources, with audio instead being controlled from a remote console. Designed for easy set-up and deployment, the RP1 provides connectivity to any Calrec Hydra2 I/O box, including Calrec’s Fieldbox and H2Hub, yielding cost-effective ways to adapt to the requirements of any situation. Such connectivity gives broadcasters access to Hydra2’s inherent management features, such as port protection, alias files, and access rights.

Elsewhere at the show, Calrec continued to draw attention to the success of its Brio compact digital broadcast audio console – “that is doing great business for us,” confirmed Cookson – and introduced the Artemis Ray console. Featuring 456 fully featured input channels – making it more powerful than the Artemis Beam – the Artemis Ray can handle up to 72 faders, the same as the larger Artemis Shine model.

Via a fresh fader/monitor panel, Artemis Ray sports a new surface layout that allows more faders in a reduced surface area. Capable of operating at multiple sample rates, at 48kHz the Artemis Ray provides up to 456 channel-processing paths, 128 programme buses, 64 IFB/track outputs, and 32 auxiliaries. The console also features a second compressor/limiter in each channel, more than 70 minutes of assignable delay, and three independent APFL systems for multiple operator use.

Ahead of the NAB launch of Artemis Ray, Calrec VP of sales Dave Letson commented: “We work closely with our customers and listen to their requirements. In situations where space is at a premium, like in OB trucks, we understand that a high fader density is not only desirable, but essential. Artemis Ray provides the same functionality as previous models, but with more channels and faders in the same footprint. It’s a very powerful combination.”