Stephen Auld: “Here at NAB we’re showcasing to our industry partners, particularly in the broadcast world, that from Dolby Vision, Dolby Atmos through to Dolby AC-4 we have global momentum with partners creating a very wide range of content genres, and distributing that to a wide variety of consumers at different price points – and that Dolby is really positioned to work with them to take their entertainment to the next level and deliver spectacular experiences to their consumers.

“The other thing we’re excited to talk to our partners here at the show is the proliferation of Dolby Vision, Atmos and AC-4 for live content production. So we’re announcing that we now have over 200 live events across sport and music that we’ve delivered in Dolby Atmos. And just a few days before the show we did some further tests with the NHRA (National Hot Rod Association) to look at how we can use Dolby Atmos to take that form of entertainment to the next level,” he said.

“In the world of live sports, it’s a complex ecosystem. But Dolby’s got a history of helping deliver the great experience to the consumer. On Dolby Vision we’ve been working on High Dynamic Range for a very long time – some of the fundamental building blocks of HDR have come from Dolby over the years.

“An example we’re showing here on the booth is with France Televisions, for the French Open tennis final, which was produced live in Dolby Vision, Dolby Atmos and Dolby AC-4, broadcast terrestrially and on satellite and received on consumer equipment – just showing what you can deliver even with these complex sports in terms of High Dynamic Range, immersive audio and personalised audio,” said Auld.

“We’re continuing to do those trials – obviously BT Sport is a long-term partner as well, not just [with Atmos] on Premier League but with Dolby Vision as well. We did a trial with them around the UEFA Champions League Final last year. We’re seeing a lot of momentum.

“When we look at distribution pipelines through broadcast, OTT and then into consumer devices, you can now get Dolby Vision televisions for less than US$500. Looking at different device types we’ve our first Dolby Vision-enabled PC, and Apple with the iPhone 10 and 8 – across different price points,” he said.

Mathias Bendull: “On the Vision side it has really been Dolby’s purpose to help the creative community to tell stories and engage their audiences. Most people associate storytelling with cinematic experiences, and with TV shows that are like cinema. 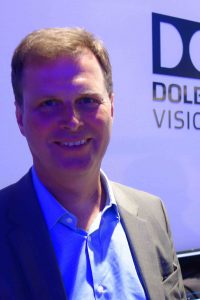 “But when you talk to the creators and directors of live sports, you realise very quickly that they have a way to think about their production as story-telling as well. A normal live sports event has a pre-show, the game and then the post-show – and this is how you engage the audience. And with sound you can tell a very specific story — whether it’s the scratching of the ice skate in the Winter Olympics or the noise of the crowd in a football stadium — really bringing you as the listener into the event,” said Bendull.

“The best thing is to be in the venue, but if you can’t do that, sound actually transports the experience to you. And Dolby’s purpose has always been to act as the conduit for that specific experience.

“We’ve had major success with BT Sport and Sky Sports on the Premier League. We’ve seen also boxing becoming another port for Atmos content-creation,” he said.

“We’ve had a very interesting experience with the Winter Olympics in PyeongChang, where NBC as the US host broadcaster created a number of events in Dolby Atmos and made them available to subscribers of Comcast as well as DirectTV/AT&T. All subscribers to Comcast and DirecTV’s 4K Olympic coverage had the potential to access live Dolby Atmos content from the Games. When you think about something like the Opening Ceremony, with all the fireworks, that creates a great immersive experience.

“On the device side, at CES we had a couple of TV manufacturers announcing support on their TV sets, so you don’t need a sound bar to render Dolby Atmos. LG is currently the only one on the market, but others will launch in the next couple of months,” he said.

“And then the biggest Dolby Atmos development of the last two months was Samsung announcing Dolby Atmos support on their S9 Galaxy phones, so we can expect Atmos content being made available for people on the go – which is a very interesting challenge for us.