Imagine Communications Chief Product Officer Brick Eksten says the focus at NAB 2017 (and for the remainder of 2017, at least) was on Open Zenium, the company’s commitment to push IP standards and transparency to the next level, thanks to a cloud-native strategy: “We are collaborating to build a community aimed at helping our customers and partners accelerate their move to IP and the cloud.” 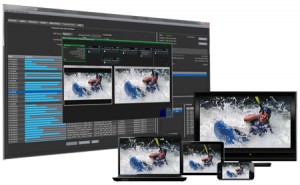 According to Eksten, through Open Zenium, Imagine is pushing standards and transparency to the next level via a cloud-native microservices platform. The five Imagine products that currently embrace Open Zenium are SelenioFlex File transcoding software, SelenioFlex Live encoding, Epic MV multiviewer, and the Versio integrated playout system.

The goal is to allow media organisations to easily create custom solutions, adapt more quickly to market dynamics, and deploy new services with unparalleled speed, reliability, and flexibility. The goal is to build a program that includes both services and support for the transition via consultation, professional development, or technology partnerships and then make functions within devices modular and licensable.

“With a future where 80% of all traffic on the Internet will be video,” says Eksten, “there are many use cases that will benefit from the work that has been done for the broadcast market and live production.”

Imagine Communications also demonstrated its Unified Playout, Scheduling, and Distribution solution at NAB 2017. The demonstration featured Imagine’s xG Schedule, the industry’s first cloud-based planning and scheduling system for linear, on-demand, and digital platforms; Versio, Imagine Communications’ fully virtualized cloud-native playout system; and Imagine’s Unified Distribution portfolio. The goal was to shine a light on the technology and business-related benefits of moving operations to the cloud, including cost decreases and workflow efficiencies, as well as the ability to maximise revenue opportunities.

To understand the Zenium platform, one first needs to understand a couple of key terms. Blueprints are master files that contain information about a workflow. Graphs are a set of connected Zenium components that can be used as an independent workflow or alongside other graphs within a blueprint.

And components are the data-processing elements that pass data via inputs and outputs between components or trigger commands. At NAB 2017, Imagine powered every demonstration over IP, and demo stations also offered blueprints of the technologies that run various services.

The components of the platform are the following: Zenium Designer is a graphical tool to design and test graphs and blueprints; Zenium Framework connects and manages the components and runs the graphs and blueprints; Zenium Repository is where graphs, blueprints, and components are warehoused (and can be synched with other repositories); and Zenium Agent comprises the Zenium Server service and the Agent Communication services that communicate with the repository to acquire Zenium plugin packages and communicate with management applications.

“We already have eight years of experience in microservices and working natively in the cloud,” says Eksten. “This was built from the ground up to be a unified framework where the APIs are consistent and you can write code for one box and have it work on others.”

Imagine Communications’ cloud-native solutions are compatible with all datacentre environments based on commercial off-the-shelf (COTS) platforms and are deployable in public- and private-cloud settings. Imagine is working in tight collaboration with Microsoft to ensure that its end-to-end solutions, from ingest to delivery, are available as services from the Azure Cloud. Its software solutions are now available in the Azure Marketplace, which reaches businesses in 140 countries, including China.