NAB Reflections: Imagine’s Tom Cotney taps into IT past to define future

Tom Cotney was named to his post as CEO of Imagine Communications in December and has already proved a quick study in the ins and outs of the broadcast business, leveraging three decades of experience in telecoms and mobile. 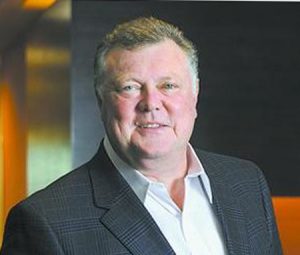 Imagine Communications’ Tom Cotney: “Technical operators are in a more complex world with the different methods of distribution. And that pressure cascades down to us”

He also grasps the challenges that Imagine specifically faces as well as those that everyone will face during a multifaceted transition to IP, the cloud, and more.

“This company has the right problems,” he says. “What I mean by that is, our problems are not our technology vision or that we have an architecture that is never going to catch on. It’s the opposite: it has caught on and was getting implemented before we really completed it. Now we have to finish some things.”

One step that has already been taken is that Imagine has split its business into two organisations: one for playout and networking (led by Steve Reynolds) and one for advertising (led by Sara Foss). Cotney will serve as CEO of both.

On the playout and networking side, Imagine, like many vendors in the traditional broadcast space, finds itself learning from customers who are doing things in new ways. IT departments, increasingly, are managing the broadcast tools that will ride on a traditional corporate network. But a product like Imagine’s Versio playout system (and nearly all broadcast-equipment manufacturers’ IT-based systems on IT networks) usually require a playout or master-control workflow that does not respond well to the congestion on data networks built for traditional enterprise applications.

“We have a PhD from the University of the Bleeding Edge, but we have two years of experience on the IP transition,” says Cotney. “And now we’re going through, in a more formal way, the early-adopter implementations and lessons learned. We will be able to work with the next wave of clients about what to do and what not to do.”

Cotney’s experience includes serving as GM of IBM Global Services’ communications sector, so he is well-versed in the IT world.

“Business pressure always trumps dogma,” he explains. “In the first phase of the evolution to the IT world, the challenge was about the concept of the cloud and concerns of having data mixed up with someone else’s data. Then the challenge was not being sure how someone would vouch for security.”

The trick to overcoming resistance, he adds, was to engage with those in the marketing department who quickly saw the value of embracing IT workflows, which could speed up transactions and business processes. Business needs would overrule concerns of an IT department, whose job, ultimately, was about not allowing a system to become less reliable.

“A lot of problems in the IT world are about discipline and execution,” Cotney says. “Here at Imagine, we are doing some things that never would have been attempted in the IT world.”

One example of that is the aggressive effort Imagine has made to embrace next-generation workflows. The company has been successful in getting customers to sign on for the journey. Cotney says the challenge now is to satisfy early adopters by the end of this summer and then take the next steps with a better understanding of how to get customers fully operational and comfortable with new workflows.

“Some of the learnings will help us be better in the cloud,” he adds.

At NAB 2018, one of Imagine’s big introductions was the xG Scorecard, an analytics and business-intelligence tool designed specifically for the media industry. It provides a comprehensive, holistic, and highly visualised view of performance and audience data, enabling smarter advertising-sales and programming decisions.

“The advertising-technology business is a really good business, and the change in the industry has presented more opportunities than problems,” Cotney notes. “As linear-TV viewers are going to alternative screens, our products help optimise the inventory: on a unit-pricing level, they can get higher prices than they are used to and offset the loss of viewership.”

The multisource capabilities of xG Scorecard make it possible to blend data from traditional sales and traffic systems, operational databases, ratings, clickstream, and even social networks to build a holistic view of audiences with real-time insights. By bringing together data normally stored in silos, xG Scorecard offers a powerful and highly visual way of evaluating and fine-tuning a media business.

“People want to spend more money on content, and that money comes out of the technical operations,” says Cotney. “But those technical operators are in a more complex world with the different methods of distribution. And that pressure cascades down to us.”