Following its annual Sunday-night NAB Keynote in front of a packed house, Ross Video kept the momentum going on the NAB 2017 exhibit floor with a booth that stayed busy throughout the week. One of the main attractions was Graphite, its newly launched all-in-one production solution combining the capabilities of a Carbonite production switcher, a feature-rich version of XPression 3D motion graphics, two channels of clip server, and the newly developed RAVE audio engine — all in a single 4RU chassis.

According to Ross Video, Graphite fits into the company’s production ecosystem and easily combines with other Ross products, such as Mira Replay, creating a professional-grade sports-production solution for budget-conscious broadcasters. In fact, the company further addressed the needs of the budget conscious by expanding its Mira Replay line to include Mira Express, geared specifically for the midrange sports market.

SVG caught up with Kevin Cottam, director, sports and live events, to discuss Graphite, Mira Express, and the company’s ever growing footprint in the sports-venue market.

One of Ross Video’s big Keynote announcements was the launch of Graphite. What, exactly, is Graphite?

Graphite is an all-in-one production vehicle: that’s a Carbonite, an Xpression, and the RAVE audio mixer, all in one. The power of that box is what we’ve been doing with all the separate products, but having everything in that one system is going to be such an easy product to install and work with. It’s very powerful. and it’s upgradable. Then, you package that with the Mira Express; it just adds to that production value. Throw an Ultrix [12G router/audio-processing engine/multiviewer] on this as well, and you’re looking at around 10RU. That’s going to be a monster [for] smaller productions.

Did you have a specific customer in mind for Graphite? Is Graphite intended for a specific type of production?

The largest it gets is to 13 inputs, so you’re looking at those smaller productions, where you’ve got two, three, maybe four cameras; a couple of other external truck feeds; [and] things like that. Maybe smaller college markets: tier 1, tier 2, even high school, that kind of thing. You drop it in [to a flypack], and you do a lot with it. 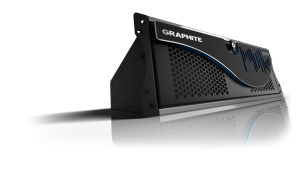 It’s also good as a redundant system, so, if you have a large production but you need some type of redundancy, you can have Graphite around, and, if anything goes wrong with the other production switcher, you can jump on Graphite. You might not have all the sources, but you can do a lot with that package.

Another huge announcement at the Keynote was Mira Express, which is very exciting for the midrange sports market. Abekas has such a great reputation in the industry. Their hardware is solid, and their support is great; they’ve been a great addition to the Ross family. The Mira replay server, before the release of Express, [has] done very well, but we still need to get into that lower tier and that budget-sensitive area. The price point and the power of Mira Express is going to fit in really nicely. Again, adding the Graphite and the Ultrix, you can put a whole system together for a very low budget, and it’s extremely powerful. The systems are all professional grade. They’re all the same gear that we’ve been using before, and, having that PCI card with the Graphite, it’s all professional-quality gear. We’re not cutting any corners. It’s professional-quality broadcast equipment for an affordable price.

Year after year, Ross Video continues to expand its footprint in the sports-venue market. What do you hope venue visitors to your NAB 2017 booth are taking away from your presence at the show?

Last year, we released Tessera, [which] has raised a lot of eyebrows in the space. Ross has been in the control-room space for a long time, but now, with display control, we’re taking the two systems and integrating everything seamlessly across [control room and display control].

We’re also using our Dashboard system to control a lot of other things in the sports-venue space. For example, with the Atlanta Braves, we started triggering all their LED lighting, their fountains, their iconic A — it’s all in that system. What we have now is our Dashboard venue-control system that is controlling everything in the venue, including the production as well as the display control so we’re tying everything in. … We’ve had so many people through [the booth], and nobody walks through and says I don’t like it. Everybody loves it and says I can’t believe what you guys are doing. And the competition has noticed as well, which is great because competition breeds innovation.