At NAB SVG Europe sat down with Neil Maycock, VP Global Marketing at Grass Valley, to discuss the integration of SAM into the GV line-up and key highlights from the show.

During NAB Grass Valley showcased new and improved broadcast solutions for live production, news, content delivery and networking. With the recent acquisition of SAM, Grass Valley now claims to offer one of the largest portfolios of products along with the most extensive R&D and service organisations in the industry. 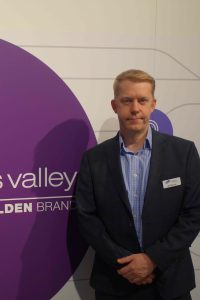 Neil Maycock: “Our aim was to come here and communicate how we were going to integrate the product lines, and I guess the headline is that the customers have received that well. They like the message, they understand the approach, and they’ve gone away reassured that we’re doing it right.

“We’ve got it wrong in the past, for sure – both companies have made mistakes in M&A – so there were customers who came here nervous. They’ve seen it, and then layer on top of that some of the integrations we are able to demonstrate already — such as Ignite driving the SAM switchers, and the LiveTouch integration — and it has gone down well. A good reception.”

With SAM over the past couple of years, with that ‘For Sale’ sign on the window from your VC owners, the only way through to success was actually to really innovate and bring out some leading-edge products to the marketplace. And you did…

“Yes. The hardest thing in SAM was cash. We were a growing business, and you normally have to inject cash to fund the growth – but we had to live within our means. In 2016 we grew 25%, which through self-funding was quite good. There wasn’t the same growth in 2017, but from what we could see the market was a bit flatter in 2017.

“We can already feel the difference of having a well-funded parent organisation [in Belden], even though it’s very early days. There are some instant benefits, from things like supply-chain pricing and combined buying, that will filter through as benefits to the customers.”

From the ‘SAM perspective’, it really has been a good fit with the environment at Grass Valley?

“From products to people and R&D it’s primarily an additive process rather than a consolidation. We’ve got a very stable business now, so customers can take reassurance we’re going to be here next year and the year after. Yes, stability from the SAM business-funding perspective, but also an affirmation of Belden’s commitment to the market to acquire SAM. All of those things stack up. We’ve got 500-plus people in R&D now, across the piece. That’s probably one of the biggest in the industry, and it’s going to drive a lot of product innovation. Watch this space is the message.”

For our audience in Europe, switchers is a key area of scrutiny. SAM’s profile was strong in our marketplace with a lot of success, particularly at the high end.

“Yes, switchers was an interesting one. Basically we did a market segmentation exercise with the products. In playout it was very much a price-functionality ‘range of cars’ (which was the analogy I used with the sales force). With switchers it was more geographic, and you’re right that Kahuna had enjoyed good success in Europe — while Grass Valley has something like 80% market share in North America.

“So the segmentation of switchers was more geographic. But when we talked frankly with the Grass guys they said that Format Fusion had been a pain in their backsides for a number of years and they were really excited to get their hands on Format Fusion.

“Likewise there can be a religion around control surfaces and operational detail, and you can have a TD who’s got his set-up on a memory stick and we could never crack it with Kahuna to read a GV config – and now we can. So I think the portability and operational links between the two switcher lines will get a lot better. Both ranges have very flexible user control surfaces, so it’s going to be easy to come up with a future one that may be – I’m speculating here – it may be that a future switcher can be flipped between Kahuna mode and Kayenne mode, depending on how you want the control surface.”

In replay, LiveTouch became a strong player quite quickly…

“Right. Dyno is what we call feature-complete, so it’s still available, we’ll still sell it and support it. But future roadmap investment goes on LiveTouch; the platform is newer and has more capability for supporting new feature-sets going forward. That was a fairly easy technology choice, given that LiveTouch was already 4K HDR ready – all those things. There’s a healthy roadmap of stuff we want to do, and now we can throw more developers at it.”

2018 is obviously a big year, for sports and live production. What kinds of themes or discussions are you hearing here at the show in that regard?

“I think the trend for remote production is interesting. For me, personally, having a camera range is really interesting, learning some of the things that are there with Grass Valley – why our sensors are great, the direct IP connectivity we’ve got that plays nicely in the remote production space.

“And actually I’ve been challenged by the camera team; they feel they’ve got some really unique capability that hasn’t been communicated to the market. So there are things we’ll be making more noise about.

“There’s also a general sense that 2018 is the year IP really starts to get some teeth and traction. Because we’ve got the standardisation and good reference projects now, the people who have been waiting have the confidence to move forward — so we should see some quite major IP projects throughout the year.”