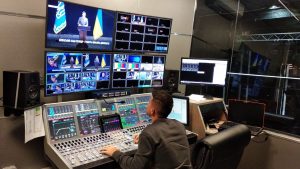 Alexander Filipushko, chief sound engineer at Nash TV, commented, “Our sound engineers are well educated on the current consoles on the market, and Calrec’s Artemis came out to be the ideal console for our needs given its quality of performance, with premium built-in processing and sophisticated networking options.

“We love having the ability to use both MADI and Dante cards. Currently we’re using MADI to integrate with multifunctional audio devices (including embedding and routing) and we’re using Dante to communicate with the wireless microphones in both of our studios, as well as for a second mixer.”

The consoles are installed in two studios within Nash’s facility. Nash covers stories from anywhere in the world, often directly from the scene. It reports on the latest Ukrainian news and events too, providing a wide range of information from experts. It also runs an associated multimedia platform.