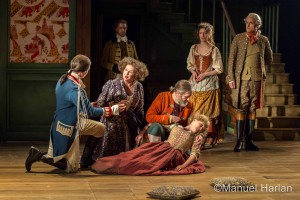 George Farquhar’s colourful 18th century comedy The Beaux’ Stratagem will be shot in 4K and then delivered for exclusive ‘encore’ screenings to Vue customers around the country as a 4K DCP (Digital Cinema Package). This will allow audiences to fully appreciate the expanded colour space captured by Sony’s F55 4K camera.

“The Beaux’ Strategem stood out as a perfect choice for capturing in 4K,” said National Theatre Live Producer, Emma Keith. “From the intricate multi-layered set to the voluptuously colourful costumes, there’s a huge amount of on-stage detail that 4K can capture.”

Directed by Lyndsey Turner and produced by Sonia Friedman Productions, October’s production of Hamlet sees Academy Award nominee Benedict Cumberbatch take the title role in Shakespeare’s tragedy. In a major event cinema breakthrough, the 15th October performance at the Barbican will be transmitted live in 4K for exclusive presentation in selected Vue cinemas around the UK. It’s the first time that any theatrical production has been delivered live to multiple locations for simultaneous 4K projection. Transmitted with 4K resolution at 50 frames per second, the live broadcast will ensure that cinemagoers enjoy realistic reproduction of the action on stage.

“This eagerly-awaited production has been the fastest-selling show in London theatre’s history”, said Keith. “It’s wonderful that we have the opportunity to future-proof Hamlet in 4K, giving the widest possible audience a chance to experience this landmark production – both live and after the event.”