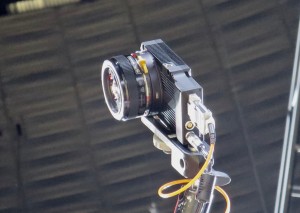 Bexel Global Broadcast Solution’s presence at the 2017 NBA All-Star Weekend February 18-19 was highlighted by the debut of the Clarity 800 slow-motion camera, a new family of cameras that was designed and built by Bexel and expands the number of places that production professionals can place high-speed camera systems.

“It’s a proprietary camera that we have been developing for more than a year, is about the size of a smartphone, and can capture HD images at 4x, 6x, and 8x speed,” said Lee Estroff, Bexel, VP of account development. “We think it is going to be a game changer.”

Two of the cameras were deployed for the D-League All-Star Game with one mounted inside the base of one of the basket stanchions and shooting upwards and the other mounted behind one of the backboards.

The name Clarity was the brainchild of Tom Dickinson, CTO of Bexel Global Broadcast Solutions. “When people talk about the value of super motion to a production they talk about how clear the image so the name Clarity clicked as what we are going is for clarity in the shot,” said Edd Bonner, Bexel’s VP of engineering and operations.

One of the engineering feats of the Clarity 800 is its small footprint as the camera weighs 12 ounces and is 4.7 inches high, 2.56 inches wide and one inch deep. Additional specs for the camera include a Micro Four Thirds imager with a 7-megapixel sensor that has a sensitivity of f11 at 2000 lux. The camera can also operate in either 50Hz or 60Hz mode and it runs on 12-volt DC power.

Bonner says the camera was built to meet the industry’s growing desire to add more high-speed cameras to a production.

“The original concept was a much larger camera that would be able to use B4 mount lenses but we saw an opportunity for a smaller camera that could fit into other places,” he said. “So we decided to make a camera that was the size of a phone.”

The engineering challenge was figuring out how to process such a high amount of live data and then spit it out to a professional replay system.

“A lot of specialty cameras record internally and the amount of time to turn around those clips is tough for production teams,” said Bonner. “So we wanted something to fit into a workflow like a regular source.” 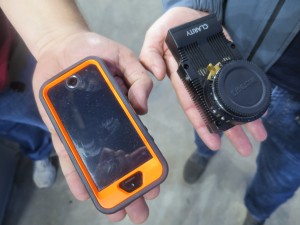 The Clarity 800 camera has a similar footprint to a smartphone

Building on Bexel and Camera Corps’ experience of using specialty cameras in live broadcast, it currently offers HD up to 8x (480 fps), and 1080p processing (it can also shoot at 1080i and 720p). The Clarity 800 also easily integrates into a live event ecosystem, operating as a broadcast camera system with real-time processing via fibre optics and integration with industry-standard video servers from companies like EVS, Evertz, and Grass Valley. It also has a full-function camera remote control panel (RCP) for paint control of the camera and a positive-lock lens mount with lens control of focus, iris, and zoom motors.

Output is via PCIe and provides 40 Gbps throughput to a processing box where the raw video is processed and corrected before sending it on to the production team via fibre where it can be used as a live feed. The processing box can be located as far as 150 feet away from the camera.

The camera is also part of a strategy by Bexel to offer proprietary systems for rent that will give it a competitive advantage versus competitors.

“One thing we are trying to do is differentiate ourselves from others in the market by building our own products to fill the gaps in the marketplace,” said Bonner. “This will be a family of cameras and we will take what we learned building this camera and use it to build more cameras.”

The goal is also to keep the costs low so that it will be a viable option for a wide range of events, not just high-level events. Look for the system to be available for rent around late April when the NAB Convention is held in Las Vegas.

“We want customers to be able to use this not just during the NBA Finals but on the whole season,” added Bonner.