The National Basketball Association (NBA) returned to The O2 on Thursday 11 January for a night of high level basketball with the help of NEP. The NBA London Game 2018 featured the Philadelphia 76ers and Boston Celtics playing a regular-season game, with the Celtics winning 114-103 against the 76ers.

Steve Hellmuth, executive vice president, media operations and technology for NBA Entertainment, spoke to SVG Europe about the UK game: “The NBA is always reaching out to its fan base, and there is nothing more important we can do than to bring a regular season game with two teams competing in the East for the playoffs.” 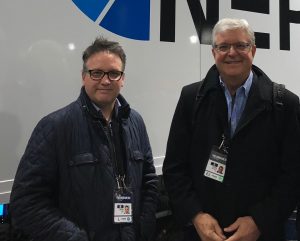 The NBA came to the UK with the aid of tech from NEP. Hellmuth stated: “NEP  is our vendor of choice for this event lead by the very competent Brian Clark.  Brian is one of the best planners and operators in the business, and we are happy to find him here at the O2 for the fourth year in a row. Brian is also servicing the Newbert production for NBC Sports New England and Philadelphia.” NBC Sports Philadelphia and NBC Sports Boston took advantage of NBC’s Newbert remote-controlled flypack for the NBA game in London, a move that allows the production teams for both networks to produce the show from NBC Sports’ Stamford, CT, facility with only the on-air talent onsite in London.

NEP has been working with the NBA since 2007 providing NBA and its rights holders with facilities and crew. Brian Clark sales director at NEP’s major projects group, told SVG Europe: “We work directly for NBA and its broadcast and entertainment teams. Also we supported NBC with elements such as cameras for their remote broadcast back to Stanford.”

As to what technological innovations were being used for this latest event at The O2, Clark said: “This was an established broadcast plan all in HD 1080 50i. We did a Mobile View o/p for delivery to mobile devices, which varies from the normal World feed with the substitution of camera 1 with another camera channel on a tighter shot.”

The general set up for this event, said Clark, was eight line cameras and three minicams or netcams on the world feed, plus three cameras on the in arena entertainment feeds along with additional facilities for referee replay and stats.

As to why The O2 was chosen as the venue, Hellmuth said: “The O2 is a professional area, its management is strong across the board, and it is set up for professional basketball.  The NBA standards for camera positions and lighting were followed in the construction of the O2, and the back of house generous enough to accommodate the teams and NBA support functions.”

In addition to the on-court action, the NBA London Game 2018 featured a variety of interactive fan activities, NBA Cares community outreach initiatives and Jr. NBA basketball programming. The fans were entertained over social media during the players’ trip to to London, with tweets and videos of the teams enjoying themselves and prepping for the game itself.

As to whether we will see more of the NBA over this side of the pond, Hellmuth stated: “The planning of the next season is underway, and the passion of the European fans will certainly be taken under serious consideration.”