Last weekend’s prestigious Presidents Cup took place in Asia for the first time ever — specifically, at the Jack Nicklaus Golf Club in South Korea — and NEP Australia was front and centre at the event for Golf Channel on NBC. “The biggest challenge has been the language barrier, but we have employed a few translators to assist in our production prep,” said producer Tommy Roy. “The locals are very proud to have an international event of this magnitude in their country.” 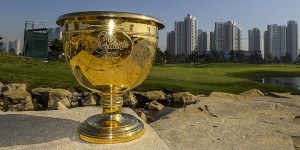 NEP Australia provided the host facilities in 2011 when the Presidents Cup was held in Melbourne, Australia. Golf Channel and NBC were the host-feed providers this time , and other broadcasters onsite included PGA Tour Channel, Jupiter TV in Japan, the Chinese Golf Network, and Seoul Broadcasting System (SBS). All were under the technical umbrella provided by NEP Australia.

The core of the production facilities was a flypack that NEP Australia shipped from Australia. The 38 tons of equipment included 42 km of course cabling, 54 cameras, a new Sony MVS8000x switcher with 4M/E, a fleet of Lawo mc2 56 and mc2 66 audio desks, 12 EVS XT3 eight-channel replay servers, and a Riedel 192×192 communications matrix. A new Imagine Communications 504×824 multiformat router pulled it all together and allowed the 27-person NEP Australia engineering team, and more than 300 onsite production professionals do what they do best.

“In providing NBC superior technical expertise along with the latest broadcast equipment all wrapped up in a turnkey flypack, our team has once again delivered a great client-focused project,” said Andrew Quinn, project director, NEP Australia.

PGA TOUR Entertainment was in charge of getting the world feed to the rest of the world, complete with commentary and some additional cameras.

“We have 40 unilateral cameras spanning the golf course to account for every conceivable angle of the competition,” said Roy. “We’re also making use of RF/wireless [transmission] for some of the handheld cameras.”

To golf fans, the event may seem like Ryder Cup 2.0, featuring US golfers taking on a golf team composed of players from Asia, Australia, and Africa. That gives it a very different cultural feel from the Ryder Cup, but, like the Ryder Cup, the primarily match-play format allows more time to focus on player profiles and other storylines.

And one big difference from a regular PGA tournament is that viewers could see every putt, even the tap-ins, because putts are much more crucial in match play. And, as shown at the Sondheim Cup a couple of weeks ago, those tap-in putts can stir up controversy. Indeed, Phil Mickelson did his part in spurring controversy when he switched out his ball on a par-five hole and suffered a two-hole penalty. And that was only day two of four.