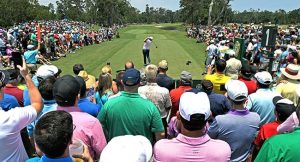 NBC Sports Group and Sky Sports, together with Golf Channel, will offer more than 150 scheduled hours of live coverage from The Players Championship taking place later this week at TPC Sawgrass in Florida.

Being staged in March for the first time since 2006 as part of the newly enhanced golf calendar in 2019, the PGA Tour’s flagship event will include 22 live hours of tournament coverage across Golf Channel and NBC. NBC Sports’ week-long coverage also will include collaborations with Sky Sports Golf, which will re-brand itself as ‘Sky Sports: The Players’ for the duration of the Championship. In total, NBC Sports Group will dedicate more than 150 hours to live programming surrounding the event.

“The return of The Players to March helps improve the rhythm of the golf calendar with six championship events across the next six months,” said Mike McCarley, president, Golf, NBC Sports Group. “The collaboration between Sky Sports and NBC Sports will help us both better serve the sports fan by providing more in-depth coverage of The Players than ever before. Together with Sky, we’re able to enhance the fan’s viewing experience surrounding The Players and elevate the collective coverage in both the US and Europe.”

“The Players Championship is one of the highlights of the year for the UK golf fan,” said Jason Wessely, head of Sky Sports Golf. “The exciting content collaboration between NBC Sports and Sky will allow our customers to get closer to the action at TPC Sawgrass than ever before.”

Following Comcast’s acquisition of Sky last year, NBC Sports Group and Sky Sports will employ their most extensive production collaboration to date, led by Sky Sports Golf airing nearly 25 hours of live simulcast coverage of Golf Central Live From The Players. In total, Sky Sports will air nearly 60 live hours of coverage, the most-ever for the network. Other collaboration efforts include:

+ Sky Sports’ analyst Paul McGinley joining Golf Central Live From The Players during the course of the week, in addition to plans for Golf Channel analysts to join Sky Sports Golf.

+ Sky Sports Golf will integrate several of the high-quality features appearing within Golf Central Live From The Players coverage.

+ Eight HD cameras covering every conceivable angle of the par-3, 17th hole, including a microscopic lens embedded in the lip of the tiny bunker fronting the green.

+ The cable-suspended FlyCam system, providing unique vantage points through an ability to fly over the body of water between the par-5, 16th and 17th hole greens.

+ A camera crane positioned 150 feet in the air offering aerial views of Holes 16-18, and one on the island adjacent to the 17th green, capturing reactions of those playing No. 17.

+ Wind-direction technology to track conditions throughout the golf course.

+ Toptracer technology capability on all 18 holes, including a reverse-flight angle for tracking tee shots from behind the 17th green.

+ Golf Central Live From The Players and Morning Drive also will make use of Toptracer technology on TPC Sawgrass’ practice range, tracking the ball flight of those in the field ahead of their round.