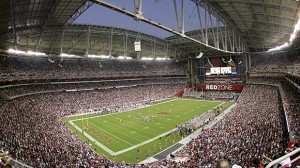 Super Bowl XLIX buzz shifted into overdrive Tuesday with Media Day, and NBC Sports did its part as well, holding a press conference to discuss some of its plans for next Sunday’s big game. Al Michaels, lead play-by-play announcer, reflected on the current state of technology as it relates to past Super Bowls.

“You don’t want technology to overwhelm the game; you want it to enhance the game,” he said. “Ten or 15 years ago, one of the first questions from the media was always how many cameras do you have? And one network would say 20, and then, the next year, it would be 25. So you can get to the point where you have 500 cameras, but you don’t need that many.”

Several 4K cameras will be added to this year’s show, and Drew Esocoff, director for the game, said they will be there for defining looks at critical plays, something NBC has had during its two previous Super Bowl broadcasts. “They don’t make the live cut of the show, but they could in a pinch,” he said. “They are placed for a defining view of a play where the winner or loser might be determined.”

Fred Gaudelli, coordinating producer for the broadcast, noted that work on the broadcast began a couple of years ago and ramped up this year with visits to University of Phoenix Stadium in Glendale, AZ, to determine, among other things, camera- and studio-location positions. A two-day seminar over the summer solidified the production plans for the game.

“Over the past weekend, we’ve been doing a variety of things like going out to the mobile units to get familiar with a much larger technical presence than we usually have,” he said. “Tomorrow, we sit down with the Patriots, Thursday with the Seahawks, and then, on Friday, we do a rehearsal with a high school football team. Saturday is final walkthroughs, and we check in with the head coaches and quarterbacks. And then, Saturday night, we have a final meeting, where we really chew through the storylines and how to cover things.”

From a technical perspective, NEP’s ND1 will play a pivotal role, capping off its first season as the home for the Sunday Night Football production team with arguably the world’s biggest single-day sports event of 2015.

ND1 comprises four interconnected trailers, with much of the production work itself centred on the Grass Valley Kayenne Elite 9M/E production switcher, Calrec Artemis and Apollo audio consoles, 32 Sony HDC2500 cameras, Canon lenses, and more than 100 channels of EVS recording capability via 14 EVS XT3 replay stations within a single production trailer. The Super Bowl will see the EVS complement expand to 19 and the number of cameras to more than 50 for game coverage.

“[Having all the replay operators in one truck] is a new way for us to do remote TV production,” explained Ken Goss, SVP, remote operations and production planning, NBC Sports, last August when the truck was unveiled (SVG will be onsite later this week, weather permitting, for full on-the-scene reports).

He said the truck features a number of technical innovations like the ability to have almost any production task completed from any workspace and a 1080p-capable infrastructure, while also being designed within green-initiative guidelines. And fibre connectivity allows the truck to be connected in less than 20 minutes.

Glen Levine, co-president, NEP Broadcasting, said new materials and design play a part in the innovation as well. “We spent a lot of time in truck design and worked closely with the manufacturer to build a lightweight truck that is efficient and streamlined,” he said. “But it also currently has the largest interior-space footprint of any of our trucks, thanks to designing it with new aerospace software.”

“The software is used to design things like the space shuttle, so we took that kind of thinking into our broadcast world,” Levine explained. “Every pound counts.”

In terms of who works where, the A unit is where the front bench is located, as well as the EIC and two engineering staffers and 11 graphics staffers, who will use ChyronHego Lyric graphics software on the Mosaic platform (first used by NBC Olympics in Sochi, so that, too, is new this season).

The B unit is home to the audio mix and submix areas as well as to camera shading and all the major components, including a massive Evertz Magnum routing switcher that connects all the trucks and devices and the EVS replay servers. From a design standpoint, housing all the electronics in one unit enables greater energy efficiencies in heating, air conditioning, and ventilation. And, from an audio perspective, it allows noise-generating equipment to be isolated from the mixing rooms.

The C unit houses the 14 replay operators, ultra-slo-mo operations, and room to haul equipment, including cameras, microphones, and cables. Individual operators, said Levine, will have their own volume and lighting controls and can also move to any other of the 14 positions to work via the Thinklogical KVM router.

The D unit is a straight-sided trailer housing two Apple Final Cut Pro edit rooms, sports media, RF, and transmission. There are 10 outbound and inbound paths (both satellite and fibre) and Gigabit Ethernet, allowing content to be transported as EVS files to and from NBC’s production facility in Stamford, CT, as well as to the NBC playout facility in Englewood Cliffs, NJ. In addition, each individual camera feed and associated microphones will be available to the production team in Stamford for use during pre/postgame coverage.

“The timing was right for this unit,” Goss noted. “Our projection is that we will use it for the next three Super Bowls.”