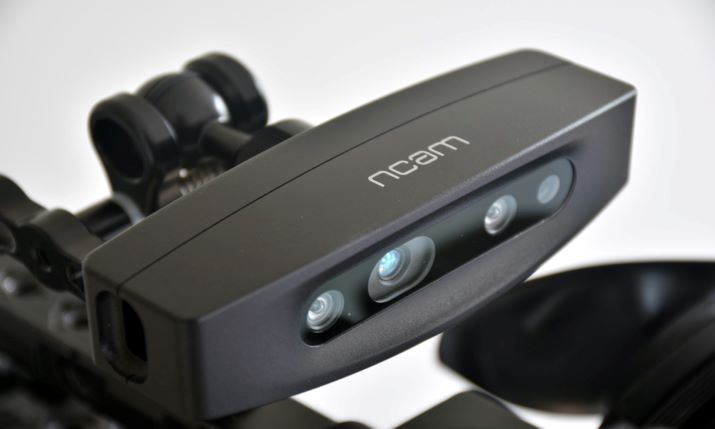 First shown as a prototype at IBC 2019, the Mk2 Camera Bar has undergone “significant development and enhancement” since with a complete redesign of both the device and the accompanying suite of software.

The Mk2 Camera Bar now includes Intel RealSense hardware and has been heavily modified. It is now five-times smaller and far lighter, and can be attached anywhere on a camera rig, the company said.

Previous generation hardware required an ethernet tether to return tracking data to a server running Ncam Reality software. The next generation software now runs on the small Mk2 Server that can be mounted  on a camera or rig, so all camera tracking and lens data is computed locally, or anywhere else required.

This means Ncam can now offer fully wireless tracking on a standard RF camera link, opening up myriad possibilities for the remote production of AR graphics, as well as freeing up valuable rack space for outside broadcast applications.

Nic Hatch, CEO at Ncam, spoke to SVG Europe about the Ncam Reality 2020 software suite: “The software side of things is dramatically changed. We listened to all our customers, and asked them what they’d like to see, and operationally what improvements, so we’ve improved that significantly. It’s almost operator-free so you don’t need to be heavily skilled at all. The cameraman can actually set it up and press go.”

Optically, the software looks for natural markers, so it does not need to be taught or trained. However Ncam has now added non-natural markers to the software’s functionality, said Hatch: “So we can train it on things that we want it to see, things like fiducials which are kind of like a barcode, which can be useful if you want to tell it, “this is the floor, these are the walls,” or you might want to add markers in the scene because the non-natural markers aren’t working so well. And that gives us complete stability in flashing light scenarios, or LED walls, things like that. The idea is we’ve got this product here which is best of breed everywhere, so now it can track anywhere and everywhere.”

Ncam has also changed its business model to simplify the way it sells. While hardware is bought separately, the system now centres around a subscription or perpetual licensing model with Ncam Reality at the core, and other features bundled on top.

Hatch said: “We are lowering the barrier to entry for everybody.”

“This release marks a huge milestone in the history of Ncam,” added Hatch. “This new platform will be the foundation of our technology moving forward and is just the beginning in allowing us to help customers realise their vision without having to worry about technology. The close partnerships we have with the likes of Intel, Epic, and others will allow us to leverage further enhancements in both tracking and rendering technologies, as well as our own developments around spatial environment data capture and its reuse in non-live environments.”